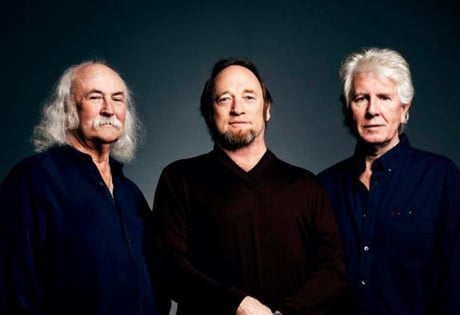 WeddingEntertainment.com makes it easy and trouble-free to check availability and pricing for booking Crosby, Stills & Nash or any act in the business for your wedding. If we don't book an act for you, our service is free. For over 26 years we have booked and produced thousands of events for our clients worldwide. We can also handle everything necessary to produce the show for one all-inclusive price so there are no surprises. Simply fill out an entertainment request form and a booking agent will contact you to discuss the possibility of booking entertainment for your wedding.

For more than four decades, the everlasting popularity of Crosby, Stills and Nash is a testament to its extraordinary members - David Crosby, Stephen Stills, and Graham Nash. Crosby, Stills & Nash reflected the political and cultural upheavals of a nation, and in the process became the only American-based band to come close to the Beatles’ impact on popular culture.

Neil Young was added before their first tour, which included the Woodstock festival, and the first Crosby, Stills, Nash & Young album, Déjà Vu, topped the charts in 1970, just before the group split up. A live double-album issued after the breakup, Four Way Street, was equally popular, and in 1974 Crosby, Stills, Nash and Young reunited for a summer stadium tour. So Far, a compilation album released shortly thereafter, became a third straight number one for CSN, and the band came together for the album Crosby, Stills, and Nash, in 1997, without Young.  Daylight Again followed in 1982, and American Dream in 1988. Live it Up followed in 1990, and Crosby, Stills & Nash toured in the summer of 1994 and released yet another album, After the Storm.  In 1999, Young was invited to guest on the album Looking Forward. The Crosby, Stills, Nash, and Young tours, which resulted in 2000 and 2002, were enormous successes.

The quality of their work and also their ability to use the stage as a political voice enabled not only their rise to fame, but also their impact on an entire generation. In 1997, CSN was inducted into the Rock and Roll Hall of Fame. The trio is still active, having toured in 2006 and even having appeared on The Colbert Report in July of 2008, with Neil Young’s harmony being performed by Colbert himself.  A few years later, in 2012, CSN toured Brazil, New Zealand, Australia and the United States, and released Crosby, Stills, and Nash 2012 on July 17, 2012.

Although the group has not performed together much in recent years, in an interview with MOJO Magazine in 2017, Neil Young made clear that the possibility of a revival of the group or future performances together were not completely out of the realm of possibility.