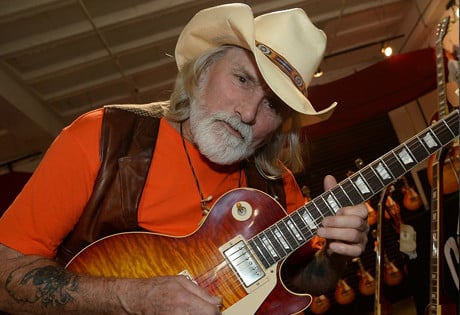 WeddingEntertainment.com makes it easy and trouble-free to check availability and pricing for booking Dickey Betts or any act in the business for your wedding. If we don't book an act for you, our service is free. For over 26 years we have booked and produced thousands of events for our clients worldwide. We can also handle everything necessary to produce the show for one all-inclusive price so there are no surprises. Simply fill out an entertainment request form and a booking agent will contact you to discuss the possibility of booking entertainment for your wedding.

Dickey Betts was a member of a number of bands in the 1960’s, and eventually formed a band with Berry Oakley. In 1969, Oakley and Betts caught up with another group for a night of jamming. Their fellow players included Gregg and Duane Allman, and the night would mark the beginning of the Allman Brothers Band.

The Allman Brothers reunited in 1989 in time for their twentieth anniversary, and the remarkable effect created by the two guitar sounds of Dickey Betts "and" Warren Haynes created a formula for success. The band quickly became one of the most successful bands in the country, and enjoyed success throughout the 1990’s, winning their first Grammy and celebrating an induction into the Rock & Roll Hall of Fame.