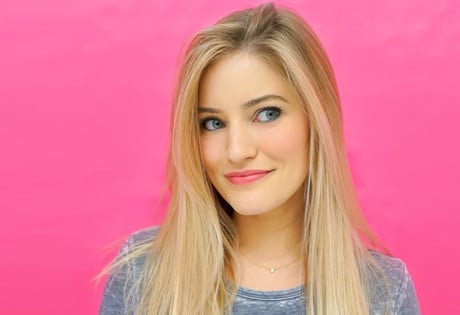 Looking to book iJustine entertainment for a wedding anywhere worldwide?

WeddingEntertainment.com makes it easy and trouble-free to check availability and pricing for booking iJustine or any act in the business for your wedding. If we don't book an act for you, our service is free. For over 26 years we have booked and produced thousands of events for our clients worldwide. We can also handle everything necessary to produce the show for one all-inclusive price so there are no surprises. Simply fill out an entertainment request form and a booking agent will contact you to discuss the possibility of booking entertainment for your wedding.

Justine Ezarik is a gorgeous, young and energetic Internet sensation that started her career in 2006. iJustine is her stage name, bringing in millions of views on her personal YouTube channel, ijustine.tv.

This beauty is originally from Pittsburgh, Pennsylvania and is thirty-two years old. Ezarik has two other sisters, both of them being an honor student alongside Justine. She then received the honor of a scholarship from the International Association of Administrative Professionals. This association is for professional networking and educational organization. Justine was extremely intelligent and this helped her kick-start her dream of becoming an Internet star.

Once Ezarik got started, she had about three million subscribers on her YouTube channel. She then starred in a few shows on YouTube, one being The Annoying Orange. With this under her belt, Ezarik made appearances on Law & Order, Criminal Minds, The Vampire Diaries and The Bold and the Beautiful. So, if gaining fame from her YouTube channel was not enough, Justine was certainly going to be noticed now.

Ezarik attended Pittsburgh Technical Institute and soon after got tons of job offers in the graphic design field. After taking an offer here, Justine gained experience and knowledge that she took with her to begin iJustine. She quickly became famous for her outstanding videos that were going viral. From this stemmed other opportunities for Justine like co-hosting on MacBreak with Leo Laporte.

Something that Ezarik is known for is her video on the 300-page iPhone bill, a video on her outrageous first iPhone bill in 2007 when the phone first came out. This went viral and was seen all over the world, gaining followers and subscribers along the way. Millions of views later, iJustine was getting paid for her video, which she was not originally supposed to.

With such fame at such a fast pace, iJustine was the head story for Yahoo! in late 2007. This only helped Justine’s career skyrocket even further. Justine became known nationwide and was receiving offers for several jobs and spokesperson positions in Pittsburgh.

Shortly after all of this, iJustine began posting funny videos on YouTube gaining more followers and keeping her original ones loyal. Fans love Justine and all that she has to offer with her bubbly personality.

Following her sudden success, Ezarik moved out to Los Angeles, California to continue her dreams and further her career. Gaining the position as a host for an online program, Ezarik became even more popular in today’s society. The PluggedIn 5 was something Ezarik took pride in and worked very hard at making amazing. After a not-so-successful attempt, Ezarik continued on in the advertising business and starred in a few commercials on television.

By 2009, Ezarik had millions more followers on YouTube, thousands of Facebook friends and thousands of followers on Twitter. This girl was headed in the right direction and there was no stopping her. She was nominated for about secen different awards, and Ezarik won a People’s Voice Award and a Streamy Award in 2015.