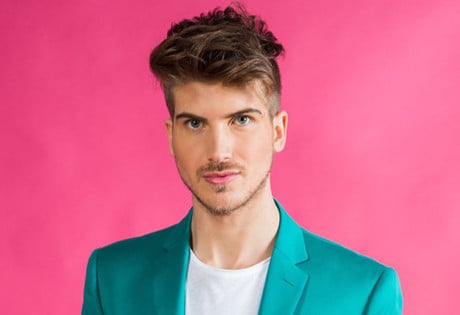 WeddingEntertainment.com makes it easy and trouble-free to check availability and pricing for booking Joey Graceffa or any act in the business for your wedding. If we don't book an act for you, our service is free. For over 26 years we have booked and produced thousands of events for our clients worldwide. We can also handle everything necessary to produce the show for one all-inclusive price so there are no surprises. Simply fill out an entertainment request form and a booking agent will contact you to discuss the possibility of booking entertainment for your wedding.

This good-looking guy is only twenty-five years old! Joey Graceffa is originally from the northeast in Marlborough, Massachusetts. Graceffa has been working with YouTube since about 2007 and has been a huge hit ever since. With about seven million followers on YouTube, Joey has been stealing the hearts of all young teenagers with his talent and good looks. Graceffa is talented in multiple areas as he can create videos, act, write songs and even produce. He has two different channels on YouTube, one is mainly for videos and the other is for video games.

As for his personal life, Graceffa never had it easy to say the least. His mother suffered from alcoholism and his brother, unfortunately, suffered from autism. However, Graceffa was determined to succeed ever since he was a young boy. He attended Fitchburg State College to get a degree in film. It was not till after college that Graceffa’s channel on YouTube was thriving. He started out with a friend, but created his own channel after college and quickly gained millions of subscribers because of his amazing videos.

As recent as 2014, Graceffa has been working on a ton of new projects. He was able to write and release his own song called Don’t Wait. Shortly after this video was viewed by millions, Graceffa made a public announcement on his channel that he is gay. He felt so relieved and confident to relay that message to the public. Because of this, Graceffa wrote a memoir called In Real Life: My Journey to a Pixelated World. This spoke volumes about his struggles growing up in a place where being gay was not acceptable. He was soon placed on the New York Times Best Seller list because of his inspirational and outstanding work.

After all the hype from his book, Joey decided to start his own YouTube Red series called Escape the Night that was instantly a success with over eight million views on the first video!