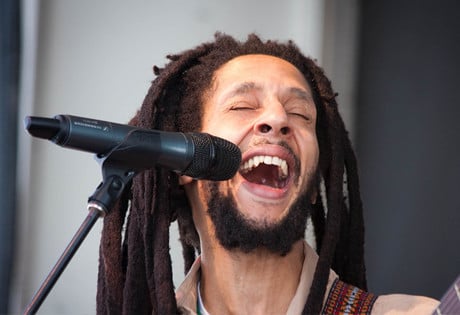 Look no further than WeddingEntertainment.com! We make it easy and stress-free to check availability and pricing for booking Julian Marley or any other act in the business. With over 26 years of experience in the industry, we have booked and produced thousands of events for clients worldwide.

British Jamaican reggae performer Julian Ricardo Marley was born in 1975 to reggae legend Bob Marley and Lucy Pounder. As a member of the Marley family growing up, needless to say young Julian was influenced by his father’s Rastafarian roots and love of music, which led him to learn multiple instruments as a child, including guitar, drums, and keyboards. Young Julian moved frequently, splitting his childhood between Jamaica and England, but it wasn’t long before he was ready to follow in his father’s footsteps and launch a career as a reggae artist.

Alongside brothers Stephen and Ziggy, Julian joined the Ghetto Youth International, a production company which prepared his first solo album. Lion in the Morning arrived in 1996 and was immediately followed by a world tour which included a performance at the Lollapalooza festival. Julian’s talents and his connection to the Marley clan made him a quick favorite at festivals, and his follow-up album, A Time and Place, was equally successful.

Julian’s big breakthrough actually came with this third endeavor, however. Awake arrived in 2009 and earned Julian Marley a Grammy nomination for Best Reggae Album. Since that time, Julian’s career has been on the rise, with recent performances at the Mawazine Festival (in Rabat, Morocco), the Fetes de Geneve (in Switzerland), and a performance in Dhaka, Bangladesh. Julian Marley has plans for continued performances in the future and a return to the studio to prepare for his next album.