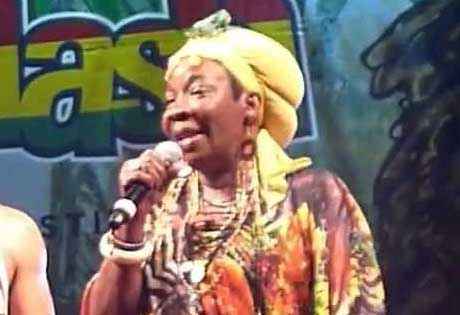 WeddingEntertainment.com makes it easy and trouble-free to check availability and pricing for booking Rita Marley or any act in the business for your wedding. If we don't book an act for you, our service is free. For over 26 years we have booked and produced thousands of events for our clients worldwide. We can also handle everything necessary to produce the show for one all-inclusive price so there are no surprises. Simply fill out an entertainment request form and a booking agent will contact you to discuss the possibility of booking entertainment for your wedding.

Rita Marley was born Alpharita Constantia Anderson in 1946 in Santiago de Cuba, Cuba. Long before she rose to fame as the widow of beloved performer Bob Marley, Rita Marley grew up in Kingston, Jamaica, raised by her aunt. A meeting with Peter Tosh in the 1960’s led to her introduction to Bob Marley, who became Rita’s mentor and lover, eventually marrying her in 1966.

Like Bob Marley, Rita became involved in the Rastafari Movement in the mid 1960’s, although she to this day is still a member of the Ethiopian Orthodox Church. Both the Rastafarian lifestyle and Bob’s music engulfed her life, and it wasn’t until after Bob Marley’s death that Rita began to record her own music, releasing a number of albums in the 1980’s.

Today, Rita Marley continues her philanthropic efforts but has also recently made a surprise return to music. Rita appears on Fergie’s song “Mary Jane Shoes” and on Khaled’s song “Raikoum.” In 2004, Rita Marley also published her biography, No Woman, No Cry: My Life with Bob Marley.