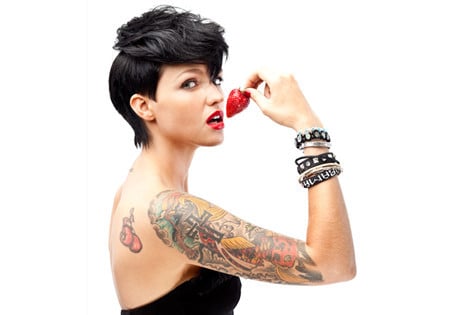 Look no further than WeddingEntertainment.com! We make it easy and stress-free to check availability and pricing for booking Ruby Rose or any other act in the business. With over 26 years of experience in the industry, we have booked and produced thousands of events for clients worldwide.

The Australian model, actress, and DJ Ruby Rose was born in 1986 in Melbourne. Long before she became an internationally recognizable figure on MTV Australia and in her role on the television series Orange is the New Black, Ruby spent her younger years living in a number of different locations throughout Australia, including Tasmania and Victoria. Eventually, her family settled again in Melbourne for Ruby’s formative upbringing, where she attended school and launched her career as a model.

In 2002, Rose joined the Girlfriend model search, finishing in second place. Her modeling career launched immediately after, beginning with the Milk and Honey fashion label. Around the same time, Ruby Rose began a career as one of MTV Australia’s VJ’s, and it was clear that the role of host was one which suited her perfectly. Since MTV Australia, Ruby Rose has gone on to host the Australian television news talk show The 7pm Project, the Ultimate School Musical, and a number of other events, including the Vancouver Winter Olympics and the MTV Europe Music Awards.

Most recently, Ruby Rose joined the cast of Orange is the New Black in the role of Stella Carlin, a role which has brought her significant critical acclaim. In addition to that, Rose recently began appearing with more frequency on the DJ circuit, in a role that she has enjoyed for many years but only recently began to pursue more seriously. Ruby recently announced a December 2015 DJ tour, bringing her to major cities such as Memphis, Boston, Chicago, Los Angeles, and Las Vegas. Rose is also scheduled to make appearances in support of some of her favorite charities, including those related to animal welfare and mental health.

In addition to her DJ tour, Ruby Rose most recently signed onto the cast for the film Resident Evil: The Final Chapter, in the role of Abigail. Rose continues to act, host, and actively pursue her rising career as a celebrity DJ.