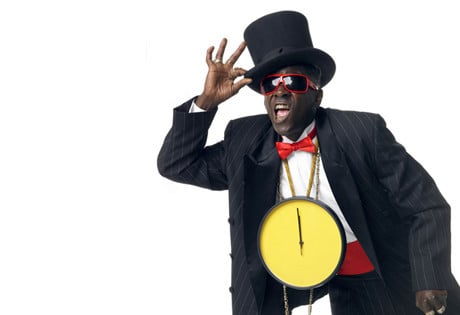 Look no further than WeddingEntertainment.com! We make it easy and stress-free to check availability and pricing for booking Flavor Flav or any other act in the business. With over 26 years of experience in the industry, we have booked and produced thousands of events for clients worldwide.

Flavor Flav was born William Jonathan Drayton, Jr. in 1959 in Freeport, New York. Flav’s musical talents were evident from a young age; he began playing piano, guitar, and drums when he was still in elementary school, and by the time he was in his mid-teens, he had mastered approximately fifteen instruments. Flavor Flav attended culinary school and worked as a chef before meeting Chuck D while taking classes at Adelphi University. The two began rapping together, and Flavor Flav discovered he had a talent for music.

In the early 1980’s, Flavor Flav founded the rap group Public Enemy, which caught the attention of Rick Rubin at Def Jam Records after the release of their track, “Public Enemy #1.” The duo signed to the record label in 1986, and released Yo! Bum Rush the Show in 1987. The album garnered only moderate attention, but the group’s sophomore effort, It Takes a Nation of Millions to Hold Us Back (1988), was a smash hit, in part on the strength of the single “Fight the Power.” Flavor Flav remained with Public Enemy alongside his friend Chuck D until well into the new millennium, during which time Public Enemy released a series of highly successful albums, including: Fear of a Black Planet (1990), Apocalypse 91… The Enemy Strikes Black (1991), Muse Sick-n-Hour Mess Age (1994), He Got Game (1998), BTN 2000 (1999), There’s a Poison Goin’ On (1999), Revolverlution (2002), and Rebirth of a Nation (2006.) Flava Flav released his first solo album in 2006, called Flavor of Love, but continued to work with Public Enemy.

In the last few years, Flavor Flav has become just as well-known for his television appearances and side projects as his music.  After appearing on The Surreal Life (VH1), during which time he started a romance with Brigitte Nielson, the network created the show Strange Love to follow their relationship further. Although the relationship with Nielson didn’t last, a relationship with the network did, and Flavor Flav moved on to Flavor of Love, which chronicled his search for romance. The show lasted for three seasons.

In addition to his work on VH1, Flavor Flav has also appeared on Celebrity Wife Swap with his fiancée in 2012; co-starred on Dr. Fubalous, a web series; and hosted the Gathering of the Juggalos in 2011. Flavor also opened his own restaurant, Flava Flav’s House of Flavor, in Las Vegas in 2012, and he released the Public Enemy album The Evil Empire of Everything in that same year.