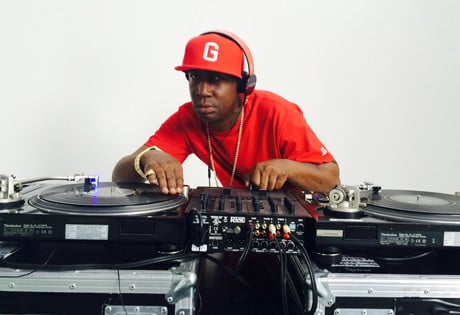 WeddingEntertainment.com makes it easy and trouble-free to check availability and pricing for booking Grandmaster Flash or any act in the business for your wedding. If we don't book an act for you, our service is free. For over 26 years we have booked and produced thousands of events for our clients worldwide. We can also handle everything necessary to produce the show for one all-inclusive price so there are no surprises. Simply fill out an entertainment request form and a booking agent will contact you to discuss the possibility of booking entertainment for your wedding.

The hip-hop icon known as Grandmaster Flash was born Joseph Saddler in 1958 in Bridgetown, Barbados. As a young man, Saddler’s family moved to New York, and he spent his formative years growing up in the Bronx. His father’s love of music, largely inspired by Caribbean sounds, had great influence on the young Joseph, and his fascination with his father’s record collection led to an interest in DJ-ing, a vocation he pursued with enthusiasm after graduating from high school.

In the 1970’s, Grandmaster Flash began to collaborate with a number of notable artists, and by the middle of the decade he’d established his own group, comprised of Kid Creole, Melle Mel, and Keith Wiggins (better known as Cowboy.) Called Grandmaster Flash & the 3 MCs, then later Grandmaster Flash and the Furious Five, the group began performing regularly in the New York City area, exploring the burgeoning hip-hop scene which was starting to take shape.

By 1979, Grandmaster Flash and the Furious Five had signed their first record deal and released their debut single, “Superrappin’.” The group began touring regularly, and during this time Grandmaster Flash also began to perfect many of the DJ-ing techniques he would become known for, including record scratching and the use of multiple turntables.  For the remainder of the 1980’s, Grandmaster Flash and the Furious Five released a number of successful albums, including The Message (1982), Greatest Messages (1984), They Said It Couldn’t Be Done (1985), The Source (1986), Ba-Dop-Boom-Bang (1987), and On the Strength (1988.) The albums featured the songs: “Freedom,” “Scorpio,” “Flash to the Beat,” “We Don’t Work for Free,” and “If U Wanna Party.”

Grandmaster Flash and the Furious Five disbanded after the passing of Cowboy in 1989, then reunited in 1995, although for the most part, Grandmaster Flash has moved on to other endeavors. In the last decade, he has become known for his weekly Sirius Radio show and his clothing line, G.Phyre. For his achievements, Grandmaster Flash has been inducted (alongside his Furious Five) into the Grammy Hall of Fame (2012.) He is also the recipient of the Lifetime Achievement Award from the Urban Music Awards. Grandmaster Flash continues to perform and record, and is currently working on another album release, scheduled for 2014.