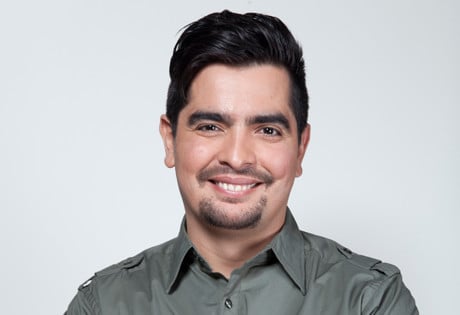 WeddingEntertainment.com makes it easy and trouble-free to check availability and pricing for booking Aaron Sanchez or any act in the business for your wedding. If we don't book an act for you, our service is free. For over 26 years we have booked and produced thousands of events for our clients worldwide. We can also handle everything necessary to produce the show for one all-inclusive price so there are no surprises. Simply fill out an entertainment request form and a booking agent will contact you to discuss the possibility of booking entertainment for your wedding.

Chef Aaron Sanchez was born in 1976 in El Paso, Texas. Long before Sanchez rose to fame as one of America’s most recognizable chefs, appearing on such television shows as Chopped and Iron Chef, he began studying the art of culinary at a very young age. By the time he was sixteen, Aaron’s skills in the kitchen were so impressive that he earned a coveted place in a master class, studying under the tutelage of famed chef Paul Prudhomme.

Prudhomme was so impressed with Aaron Sanchez’s talents that he hired him full-time after Sanchez completed his studies at the Dwight School. In the mid 1990’s, Aaron enrolled in Johnson & Wales to further study his craft, and after graduating he worked for Douglas Rodriguez in New York’s Patria. It was there that he met Alex Garcia, and upon Garcia’s departure from Patria, he offered Aaron Sanchez a position with him at his new restaurant, Erizo Latino, which went on to become one of New York’s most highly rated restaurants.

Eventually, Sanchez accepted a position as executive chef first at L-Ray, and then at the restaurants Cuba and Paladar. Under Aaron’s culinary guidance, Paladar went on to become one of New York’s best restaurants, earning both the establishment and Sanchez rave reviews. It was also around this time that Sanchez began making appearances on many of the Food Network’s top rated shows, including Iron Chef America, the Next Iron Chef, Chopped, Chef vs. City, and Heat Seekers. He also published his first book, La Comida del Barrio: Latin- American Cooking in the U.S.A.

Today, Aaron Sanchez is one of the most recognizable chefs in America. Aside from his continued television appearances, he is currently owner of the Mexican restaurant Mestizo in Leawood, Kansas.