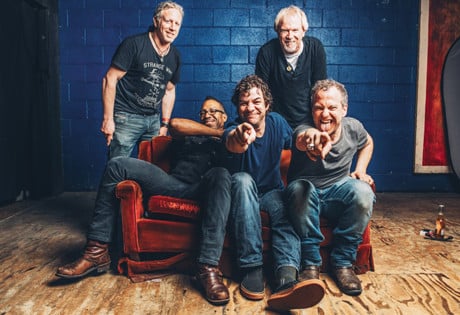 Looking to book Ween entertainment for a wedding anywhere worldwide?

WeddingEntertainment.com makes it easy and trouble-free to check availability and pricing for booking Ween or any act in the business for your wedding. If we don't book an act for you, our service is free. For over 26 years we have booked and produced thousands of events for our clients worldwide. We can also handle everything necessary to produce the show for one all-inclusive price so there are no surprises. Simply fill out an entertainment request form and a booking agent will contact you to discuss the possibility of booking entertainment for your wedding.

The alternative rock band known as Ween was established in Pennsylvania in the early 1980’s. Founded by childhood friends Mickey Melchionado and Aaron Freeman (who professionally go by the moniker’s Dean Ween and Gene Ween), the two musicians began playing together while still in high school. Today known for their highly unusual and eclectic blend of everything from country to soul and punk to metal, Ween initially spent nearly a full decade self-marketing their unique brand of music before garnering their first recording contract.

Ween, operating as a duo, self-released much of their music in cassette format throughout the 1980’s, recording using a DAT machine and bringing musicians Sim Cain and Andrew Weiss into the group for live performances. By the late 80’s, they’d established a strong following in the northeast, performing often throughout Pennsylvania, New Jersey, and New York, opening for acts such as Henry Rollins, They Might Be Giants, and Butthole Surfers.

Eventually, their talents caught the eye of an A&R representative for Twin/Tone; after signing with the label, Ween released their debut album, GodWeenSatan: The Oneness, in 1990. The album featured a staggering twenty-six songs from their first six years together, including “Bumblebee,” “Nan,” “Fat Lenny,” “L.M.L.Y.P.” and “You Fucked Up.” GodWeenSatan: The Oneness was followed by The Pod, and then in 1992 Ween left Twin/Tone to sign with Elektra Records.

Under Elektra Records, Ween released their major label debut, Pure Guava, in 1992, and the album truly put the band on the map. On the strength of the hit single “Push th’ Little Daisies,” the album finally made the group an international hit and gave them the means to expand their lineup and improve their production quality.

Today, Ween continues to perform and record with the current lineup of: Dean Ween, Gene Ween, Dave Dreitwitz, Claude Coleman, Jr., and Glenn McClelland. Although Ween embarked on a significant hiatus following La Cucaracha, the group resurfaced in 2010 with the single “DC Won’t Do You No Good,” and reconvened for their first tour in a number of years.