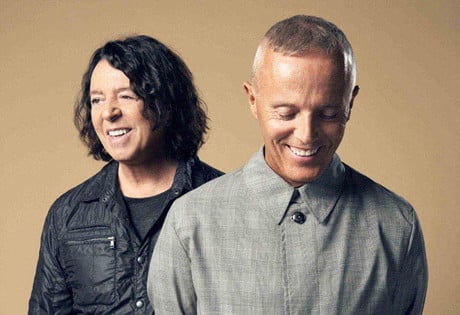 Looking to book Tears for Fears entertainment for a wedding anywhere worldwide?

WeddingEntertainment.com makes it easy and trouble-free to check availability and pricing for booking Tears for Fears or any act in the business for your wedding. If we don't book an act for you, our service is free. For over 26 years we have booked and produced thousands of events for our clients worldwide. We can also handle everything necessary to produce the show for one all-inclusive price so there are no surprises. Simply fill out an entertainment request form and a booking agent will contact you to discuss the possibility of booking entertainment for your wedding.

Tears for Fears founding members Roland Orzabal and Curt Smith were childhood friends growing up in Bath, England. As young teenagers in the late 1970’s, they formed the band Graduate and found some success with a few singles, including “Elvis Should Play Ska.” They quit the band in the early 1980’s, but established Tears for Fears and signed a record contract with Polygram in 1982.

Tears for Fears’ debut album, The Hurting, was released in 1983 and became a smash hit in the UK. But it was the album Songs from the Big Chair (1985) which would be Tears for Fears’ international breakthrough, shooting to the top of the charts in America and spawning the iconic singles "Everybody Wants to Rule the World" and "Shout," both of which found a home at number one on the charts. “Head Over Heels” was also successful, and Tears for Fears began to carefully plan their follow up albums.

Tears for Fears continued to release albums throughout the rest of the 1980’s and 1990’s, including The Seeds of Love (1989), Elemental (1993), Raoul and the Kings of Spain (1995), bringing audiences more hit singles such as "Woman in Chains" and "Sowing the Seeds of Love.” But by the start of the new millennium, Orzabal and Smith were experiencing discontent and differences, and so Tears for Fears went their separate ways, with both men embarking on solo projects.

Orzabal and Smith reunited in 2004, however, to release Everybody Loves a Happy Ending, featuring the single “Closest Thing to Heaven,” which became the first hit for Tears for Fears in almost a decade.  The duo performed live in Paris in 2005, and in 2006, Songs from the Big Chair was re-released as a two-disc edition with additional new tracks. Raoul and the Kings of Spain was also re-released in 2009 with additions, and in 2010, Tears for Fears embarked on a worldwide tour with Spandau Ballet.

Tears for Fears have sold more than eight million albums in the United States and twenty-five million worldwide, and Orzabal and Smith have plans for future projects and additional performances in the future.