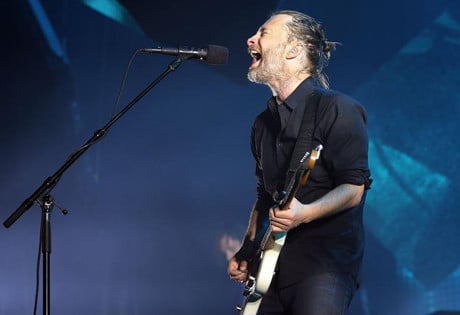 Looking to book Radiohead entertainment for a wedding anywhere worldwide?

Look no further than WeddingEntertainment.com! We make it easy and stress-free to check availability and pricing for booking Radiohead or any other act in the business. With over 26 years of experience in the industry, we have booked and produced thousands of events for clients worldwide.

The English rock band Radiohead was created in the mid 1980’s in Oxfordshire, England, when its founding members met in school. Tom Yorke, Ed O’Brien, Phil Selway, and Colin Greenwood continued to play together even after graduating from school and moving on to university, and after finishing their studies they regrouped and began to take the band’s future more seriously. Radiohead recorded a series of demos and began performing at a number of local venues, eventually garnering the attention of EMI Records.

Radiohead signed with EMI in 1991 and released the EP Drill in 1982. It did not perform well initially; neither did Radiohead’s full-length debut, Pablo Honey, upon its release in the following year. The album did rise into the charts in the UK, but the songs “Creep,” “Anyone Can Play Dead,” and “Stop Whispering” failed to garner much airplay or commercial sales.  Radiohead turned its attention to other markets, though, and found frequent airplay in Israel and across the ocean in the United States. A video for the single “Creep” began to receive significant airplay on MTV, and by the time Radiohead began their first North American tour, they were surprised to find that they’d developed a large fan base in America.

Radiohead returned from the tour and immediately entered the studio to begin work on their sophomore effort. The Bends was released in 1995, finally bringing the band some recognition and commercial success in the UK. The songs “High and Dry,” “Fake Plastic Trees,” “Street Spirit (Fade Out),” and “Just” all reached into the charts both in America and the UK, but their biggest success was just around the corner with the OK Computer, a smash hit released in 1997 that brought Radiohead to the level of critical acclaim they’d hoped for. The album spawned the hit singles “Karma Police,” “Paranoid Android,” and “No Surprises” and earned the band a Grammy for Best Alternative Album.

Since that time, Radiohead has enjoyed steady success with the additional albums Kid A (2000), Amnesiac (2001), Hail to the Thief (2003), In Rainbows (2007), and The King of Limbs (2011.) The band has sold more than thirty million albums worldwide and ranks on Rolling Stone’s list of The Greatest Artists of All Time. Radiohead continues to perform, record, and tour, with the current lineup of Colin Greenwood, Jonny Greenwood, Ed O’Brien, Philip Selway, and Thom Yorke.