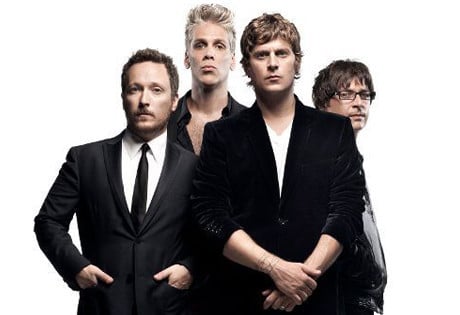 WeddingEntertainment.com makes it easy and trouble-free to check availability and pricing for booking Matchbox Twenty or any act in the business for your wedding. If we don't book an act for you, our service is free. For over 26 years we have booked and produced thousands of events for our clients worldwide. We can also handle everything necessary to produce the show for one all-inclusive price so there are no surprises. Simply fill out an entertainment request form and a booking agent will contact you to discuss the possibility of booking entertainment for your wedding.

Matchbox Twenty’s debut album, Yourself or Someone Like You, came in 1996, when grunge was on its way out and the American pop music scene was about to receive a makeover. The timing and talents of Matchbox Twenty coincided to create an unanticipated success that continues today.

The band came together when front man Rob Thomas made his way to Orlando, Florida, and met Brian Yale (bass) and Paul Doucette (drums.) It would be a few more years, though, before they would find Adam Gaynor (guitar, vocals) and Kyle cook (lead guitar) to round out Matchbox Twenty, and then meet up with Matt Serletic, the producer who would eventually see them to success. Under Serletic’s guidance, Matchbox Twenty signed to Lava and recorded Yourself or Someone Like You. The album was released in 1996, and Matchbox Twenty toured extensively in support of its release. A strong fan base followed. Their single “Long Day” was followed by their breakthrough hit, “Push,” and by 1997 Matchbox Twenty started to receive heavy airplay.

Yourself or Someone Like You reached the Top 40 and went gold that year, but it was in the fall of 1997 that the chart-topping single “3am” exceeded the success of “Push” and eventually sent the Matchbox Twenty album to the top of the charts, reaching multi-platinum status. Since that time, Matchbox Twenty released a host of albums that would all see success, including: Mad Season (2000), More Than You Think You Are (2002), EP (2003), Exile on Mainstream (2007), and North (2012.) Matchbox Twenty also released the DVD, Show: A Night in the Life of Matchbox Twenty, featuring a live performance from 2004.

Matchbox Twenty continues to write, record, and tour, with its original lineup of Thomas, Cook, Yale, and Doucette. The group recently spent much of 2017 on tour, first on the Twentieth Anniversary Tour, and then later as a co-headliner alongside Counting Crows in the Brief History of Everything Tour.