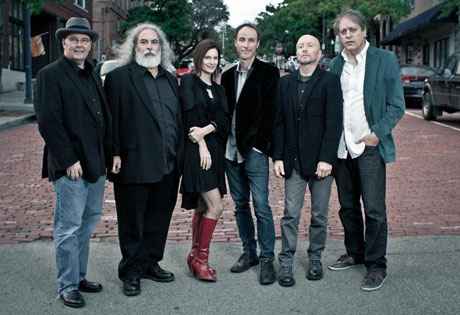 The alternative rock band 10,000 Maniacs was established in the early 1980’s by founding members Teri Newhouse, Robert Buck, Chet Cardinale, Steven Gustafson, and Dennis Drew. Originally named Still Life, the group recruited Natalie Merchant for some vocals, and it was quickly clear that her unique voice should front the band. After some changes to the initial lineup, the group adopted the name 10,000 Maniacs just before Labor Day in September of 1981, performing under their new name for the holiday.

One year later, 10,000 Maniacs was ready to record their first album, the EP titled Human Conflict Number Five. While the album didn’t garner much commercial attention, on the creative front it was a breakthrough for the band, earning them a deal with Elektra Records in 1984. After signing, 10,000 Maniacs released their debut full-length album, The Wishing Chair, which reached silver status in the UK but still wasn’t quite the North American breakthrough the band was hoping for.

That breakthrough came with the albums In My Tribe (1987) and Blind Man’s Zoo (1989), the latter of which became a top twenty hit in both the UK and the United States, reaching platinum status in America. My Tribe gave 10,000 Maniacs its first top ten single, with the song “What’s the Matter Here?” and Blind Man’s Zoo dropped some of the band’s most notable singles, including “Trouble Me” and “Eat for Two.” But the band’s most successful releases were still to come, with the mega-hit “These Are Days” and the singles “Candy Everybody Wants,” “Everyday is Like Sunday,” and “Because the Night,” from the albums Our Time in Eden and the EP Candy Everybody Wants.

In 1992, Natalie Merchant left the band to pursue a solo career, but not before performing one of the most significant MTV Unplugged performances in the network’s history. Today 10,000 Maniacs continues to perform and record with the lineup of Dennis Drew, Steve Gustafson, Jerry Augustyniak, Jeff Erickson, and Mary Ramsey on lead vocals. The group recently released the albums Music from the Motion Picture (2013), Twice Told Tales (2015), and the EP For Crying Out Loud (2016.)