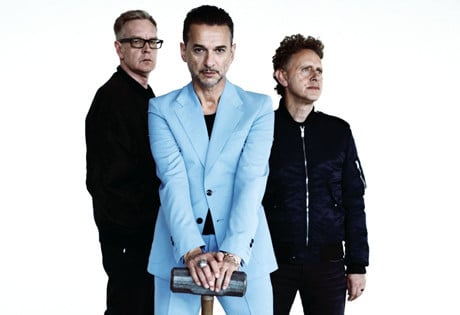 WeddingEntertainment.com makes it easy and trouble-free to check availability and pricing for booking Depeche Mode or any act in the business for your wedding. If we don't book an act for you, our service is free. For over 26 years we have booked and produced thousands of events for our clients worldwide. We can also handle everything necessary to produce the show for one all-inclusive price so there are no surprises. Simply fill out an entertainment request form and a booking agent will contact you to discuss the possibility of booking entertainment for your wedding.

Depeche Mode began in 1976, when Andrew Fletcher and Vince Clark created the band No Romance in China. Within three years, the group had disbanded. A series of other incarnations under different names eventually led to the addition of David Gahan on vocals, and in 1980, Depeche Mode was born. The group added a strong synthesizer, techno sound to their music and established a following on the club scene in London.

After a few moderately successful singles, Depeche Mode released Speak and Spell, their debut album, in 1981.  A Broken Frame came next in 1982, followed by Construction Time Again (1983), but it was Some Great Reward (1984), which became the big breakthrough for Depeche Mode. The album featured the breakthrough hit “People are People,” which hit the top of the charts worldwide, and paved the way for future success on subsequent albums: Black Celebration (1986), Music for the Masses (1987), Violator (1990), Songs of Faith and Devotion (1993), and Ultra (1997), with the collective hits “Strangelove,” "Policy of Truth," "Enjoy the Silence," "Personal Jesus," ??"Barrel of a Gun," and "It's No Good."

In the new millennium, Depeche Mode continued its successful trend, with the releases Exciter (2001), Playing the Angel (2005), and Sounds of the Universe (2009), featuring the hits "Dream On,” "I Feel Loved,” "Precious," and "John (The Revelator.)"

Depeche Mode continues to perform and record with all three original members (Fletcher, Gore, and Gahan.) The band has been recognized as the 10th most successful dance club artist of all time by Billboard Magazine, and received their first nomination for induction into the Rock and Roll Hall of Fame in 2018. The band’s latest album, Spirit, was released in 2017 and accompanied by an extensive worldwide tour that lasted well into 2018.