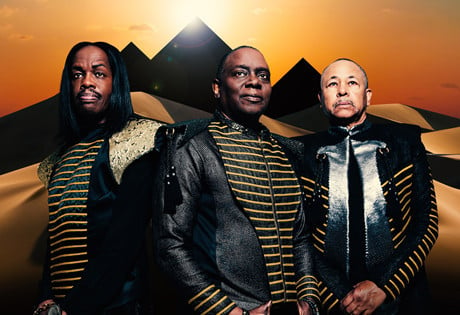 Look no further than WeddingEntertainment.com! We make it easy and stress-free to check availability and pricing for booking Earth, Wind & Fire or any other act in the business. With over 26 years of experience in the industry, we have booked and produced thousands of events for clients worldwide.

Since 1969, when Earth, Wind, and Fire first burst onto the music scene, audiences have been blessed with some of the most memorable hits of the 1970's, including "Reasons," "Shining Star," "After the Love Has Gone," and "September." Earth, Wind, & Fire's historical achievements in music, being the first black artists to have a single and album at the number one position on the charts at the same time, have inspired musicians for four decades.

The 1980's brought a new musical sound, and Maurice Smith, Earth, Wind, and Fire's founder, decided to infuse a more electronic sound into the band's music. Raise! was released in 1981, selling over a million copies and giving audiences the hits "Let's Groove," and "Wanna Be With You." The latter won Earth, Wind & Fire a Grammy for Best R&B Vocal Performance by a Duo or Group.

Powerlight came later, with the singles "Side by Side" and "Fall in Love with Me," and Electric Universe was released in 1983. Earth, Wind, & Fire took a hiatus until 1987, for the band's reunion. Original members Philip Bailey, Maurice White, Verdine White, Andrew Woofolk, and Ralph Johnson were joined by Dick Smith, Sonny Emory, and Sheldon Reynolds. Horns were added, with Gary Bias, Reggie Young, and Raymond Lee Brown.

Earth, Wind, and Fire released Millennium in 1993, and in 1994, the band was inducted into the NAACP Hall of Fame. The following year, Earth, Wind, and Fire received a star on the Hollywood Walk of Fame, and shortly thereafter, Maurice White retired from touring. A few years later, he revealed that he'd been struggling with Parkinson's disease, and an outpouring of support led to treatments which allow him to appear once again with Earth, Wind, and Fire whenever possible.

In the Name of Love was released in 1997, and that same year Earth, Wind & Fire performed at the 1997 Montreux Jazz Festival. In 2004, the DVD of that performance was released to enormous success.

Earth, Wind, & Fire were inducted into the Rock and Roll Hall of Fame in 2000, and the band toured with Chicago in 2004 and 2005. That same year, Earth, Wind, and Fire released Earth, Wine, and Fire's Illumination, and the album was nominated for a Grammy.

Earth, Wind, and Fire have since given numerous performances, including the Nobel Peace Prize Concert in 2007 and the Governor's Dinner at the White House in 2009, becoming the first musicians to perform after Barack Obama's inauguration. That same year, they toured again with Chicago and performed at the New Orleans Jazz & Heritage Festival. Earth, Wind, and Fire appeared at the event again in 2010, and that same year contributed to the "We Are The World 25 for Haiti" single.

Earth, Wind, & Fire continues to perform and tour well into the new millennium.