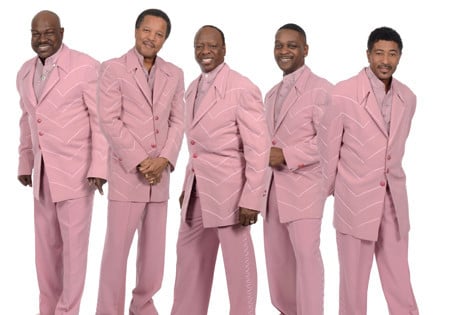 Looking to book The Spinners entertainment for a wedding anywhere worldwide?

WeddingEntertainment.com makes it easy and trouble-free to check availability and pricing for booking The Spinners or any act in the business for your wedding. If we don't book an act for you, our service is free. For over 26 years we have booked and produced thousands of events for our clients worldwide. We can also handle everything necessary to produce the show for one all-inclusive price so there are no surprises. Simply fill out an entertainment request form and a booking agent will contact you to discuss the possibility of booking entertainment for your wedding.

The Spinners were formed in Detroit in the late 1950’s, when founding members Bobbie Smith, Pervis Jackson, George W. Dixon, Billy Henderson, and Henry Fambrough were still in high school. The Spinners’ first single, “That’s What Girls are Made For,” was released in 1961 and became an immediate hit, but a series of less successful singes plagued the band until the early 1970’s.

With the hit single “It’s a Shame” in 1970, the Spinners began to receive some attention, but it wasn’t until switching to Atlantic Records and developing a more distinctive sound that the Spinners eventually rose to become one of the greatest soul groups of the 1970’s. The Spinners scored a number of hits during this period, including "I'll Be Around," "Could It Be I'm Fallin in Love," "Mighty Love," "Ghetto Child," "Then Came You," "Games People Play," "One of a Kind (Love Affair)," "You're Throwing a Good Love Away,” and "The Rubberband Man."

The Spinners continued together in the 1980’s and 1990’s, and despite a number of changes to the lineup, they continue in the new millennium. At Their Best (1999) brought the Spinners into the next decade, and recently they have made a number of appearances, such as the Late Show with David Letterman (2006.) The Spinners still actively tour with Fambrough and Smith, plus Jessie Peck, Marvin Taylor, and Charlton Washington. The Spinners were nominated for an induction into the Rock & Roll Hall of Fame in 2011.