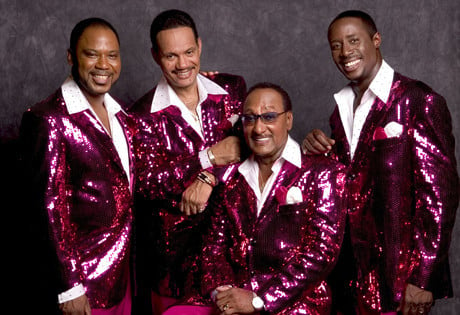 Looking to book The Four Tops entertainment for a wedding anywhere worldwide?

Look no further than WeddingEntertainment.com! We make it easy and stress-free to check availability and pricing for booking The Four Tops or any other act in the business. With over 26 years of experience in the industry, we have booked and produced thousands of events for clients worldwide.

For over forty years, the Four Tops have been singing songs about love, romantic heartbreak, and happiness, in the best of the Motown tradition. By the time the group—originally called the Aims—changed their name to the Four Tops, the band had caught the attention of Berry Gordy with Motown Records, and their career was launched. “Baby, I Need Your Loving,” the Four Tops’s first single, shot to the top of the charts, and it wasn’t long before they were touring with other Motown artists, such as The Supremes, Marvin Gaye, The Temptations, Smokey Robinson, and Stevie Wonder.

Since the late 1980’s, the Four Tops have focused mainly on touring and live performances. In 1997, the Four Tops lost Lawrence Payton to cancer, and the remaining members continued to tour as a trio, calling themselves the Tops. Theo Peoples, formerly of The Temptations, was brought in to replace Payton in 1998, and the Four Tops performed on a number of television specials during this period, including Motown 45.

In total so far, The Four Tops have recorded thirty-five albums during their career, and have enjoyed an impressive list of Top Ten hits, many of them number one hits or gold records - "Baby, I Need Your Loving," "I Can't Help Myself (Sugarpie, Honeybunch)," "It's the Same Old Song," "Reach Out (I'll Be There)," "Bernadette," "Walk Away, Rene," "Standing in the Shadows of Love," "Shake Me, Wake Me," and "Still Waters Run Deep."

Today, two decades into the new millennium, the Four Tops continues to perform and record with the current lineup of Fakir, McNeir, Roquel Payton, and Harold “Spike” Bonhart (Fakir is the only original member remaining.) The group was inducted into the Rock and Roll Hall of Fame in 1990, and into the Vocal Group Hall of Fame in 1999. Rolling Stone ranked the Four Tops as one of the 100 Greatest Artists of All Time in 2004.