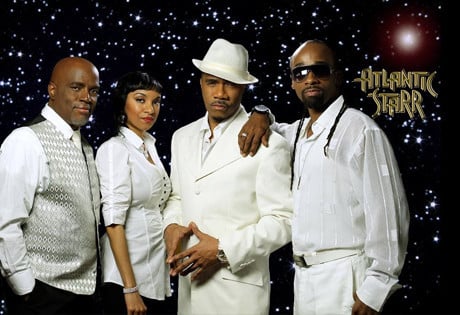 BookingEntertainment.com makes it easy and trouble-free to check availability and pricing for booking Atlantic Starr or any act in the business for your wedding. If we don't book an act for you, our service is free. For over 25 years we have booked and produced thousands of events for our clients worldwide. We can also handle everything necessary to produce the show for one all-inclusive price so there are no surprises. Simply fill out an entertainment request form and a booking agent will contact you to discuss the possibility of booking entertainment for your wedding.

The R&B band Atlantic Starr was established in the mid 1970’s in New York. Long before the band become know for their iconic 80’s hits “Secret Lover” and “Always,” Atlantic Starr’s founding members moved to the west coast and began performing around at local nightclubs until they caught the attention of a major record label and released a self-titled debut in 1978.

The album was slow to rise and only garnered moderate success, but it paved the way for the additional albums Straight to the Point (1979), Radiant (1980), Brilliance (1982), and Yours Forever (1983), which slowly began to garner attention for Atlantic Starr. The band’s major breakthrough came in 1985, though with As the Band Turns, which was a huge crossover success, spawning the group’s iconic hit “Secret Lover.” From then on, Atlantic Starr continued to enjoy significant success for the rest of the decade, with the additional albums All in the Name of Love (1987) and We’re Movin’ On Up (1989.) The albums spawned the additional hits “Always,” “My First Love,” “My Sugar,” and “Masterpiece.”

In the 1990’s, Atlantic Starr released the albums Love Crazy (1991), Time (1994), All Because of You (1997), and Legacy (1999), although none of the albums performed as well as the releases from the 1980’s. Nevertheless, Atlantic Starr continues to perform in the new millennium, and their classic hit “Secret Lover” remains an enduring hit and iconic for the era.