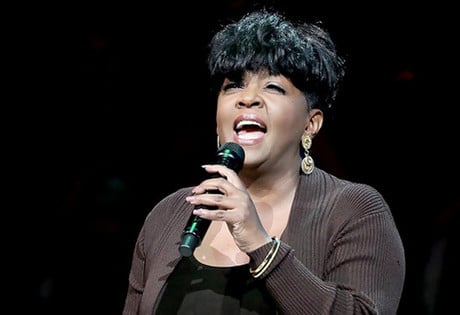 WeddingEntertainment.com makes it easy and trouble-free to check availability and pricing for booking Anita Baker or any act in the business for your wedding. If we don't book an act for you, our service is free. For over 26 years we have booked and produced thousands of events for our clients worldwide. We can also handle everything necessary to produce the show for one all-inclusive price so there are no surprises. Simply fill out an entertainment request form and a booking agent will contact you to discuss the possibility of booking entertainment for your wedding.

Anita Baker was born in Toledo, Ohio, in 1958, and grew up in Detroit. Her childhood was filled with the influence of singers like Ella Fitzgerald and Nancy Wilson, and so it was no surprise that by the age of twelve, Anita was singing in a gospel choir.

At the age of sixteen, she was singing with local bands, and in 1975, Anita Baker auditioned for one of Detroit’s most popular acts, Chapter 8. She joined the group, and a few years later, in 1982, Otis Smith contacted Anita Baker and offered her an opportunity to record with Beverly Glen, his brand new label. Anita Baker accepted, and The Songstress was released in 1983. The album garnered her enough attention to land a deal with Elektra in 1985, and her first major-label debut, Rapture, was released in 1986. The album was a huge success, earning Grammy recognition and going platinum.

With her jazz, gospel, pop and R&B influences, Anita Baker appealed to both adult and urban audiences. Rapture went on to enjoy numerous hits, including “Sweet Love” and “Caught up in the Rapture.” Compositions followed in 1990.
As Anita Baker’s third album with Elektra, the album featured more jazz influence than her earlier albums, and went on to enjoy critical acclaim.

After a lengthy hiatus, Anita Baker returned in 2003 with My Everything, and then two years later, with Christmas Fantasy. She returned again in 2012 with the first single from her new album, Only Forever. The song, "Lately", was a remake of the 1999 hit by R&B singer/actor Tyrese and earned Anita Baker a Grammy nomination for Best Traditional R&B Performance.

Anita Baker announced in 2017 that she would be retiring from her music career. Going forward, she will likely only be available for occasional performances for special circumstances.