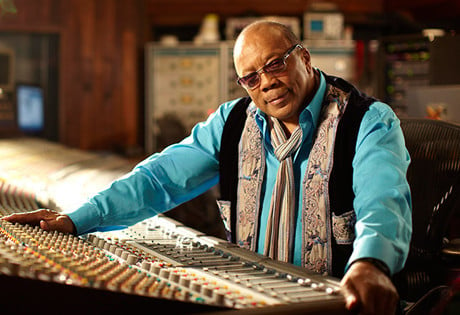 WeddingEntertainment.com makes it easy and trouble-free to check availability and pricing for booking Quincy Jones or any act in the business for your wedding. If we don't book an act for you, our service is free. For over 26 years we have booked and produced thousands of events for our clients worldwide. We can also handle everything necessary to produce the show for one all-inclusive price so there are no surprises. Simply fill out an entertainment request form and a booking agent will contact you to discuss the possibility of booking entertainment for your wedding.

Legendary American record producer, composer, and film producer Quincy Jones, Jr. was born in 1933 in Chicago, Illinois. As a child, Quincy was enamored with music, learning to play the piano as a child and listening to his mother sing around the house. At the age of ten, the Jones family moved to Bremerton, Washington, where Quincy would spend his teenage years active in high school’s jazz band. A chance meeting with Ray Charles when both young men were only teenagers solidified Quincy’s determination to become a musician someday.

After earning a scholarship to the Berklee College of Music, Quincy began to study and accept opportunities to perform more seriously, appearing frequently at local bars and clubs. After receiving an offer to tour with Lionel Hampton as a jazz trumpeter, Quincy hit the road and began his official foray into the music business as a professional performer. Throughout the 1950’s, Jones played for such legendary performers as Dizzy Gillespie, until in the late 1950’s ABC-Paramount Recorders offered him the opportunity to start his own band.

Rapidly climbing the ladder in the industry, Quincy Jones became vice-president of Mercury Records in 1964, becoming the first African American to do so. Throughout most of the 1960’s and 1970’s, Jones focused on film scoring, writing the music for such movies as The Pawnbroker, In Cold Blood, The Italian Job, The Getaway, and The Out-of-Towners, to name a few. He continued his work writing music for television and film, crafting the theme songs for sitcoms such as Sanford and Son and The Bill Cosby Show. After founding his own production company, Qwest Productions, Jones began his collaborative work with Michael Jackson, and following the worldwide success of Jackson’s album Thriller, Jones quickly became a household name.

Since that time, Quincy Jones has risen to become one of the era’s most globally recognizable producers in both music and film. His career boasts a staggering twenty-eight Grammy Awards and nearly eighty Grammy Award nominations, in addition to the Grammy Legend Award in 1991. Time Magazine recognizes Quincy as not only one of the most influential producers of the modern era, but also one of the most influential jazz musicians of the century. Jones is also known for his philanthropic endeavors and social activism, which include a focus on African American arts, music education, and global issues that affect rural areas and undeveloped nations.