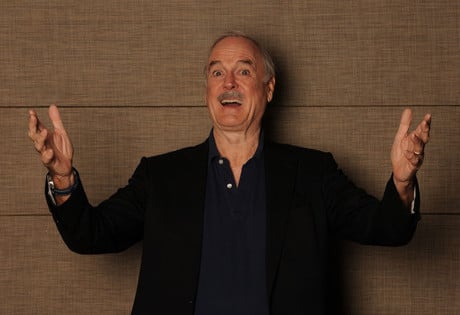 WeddingEntertainment.com makes it easy and trouble-free to check availability and pricing for booking John Cleese or any act in the business for your wedding. If we don't book an act for you, our service is free. For over 26 years we have booked and produced thousands of events for our clients worldwide. We can also handle everything necessary to produce the show for one all-inclusive price so there are no surprises. Simply fill out an entertainment request form and a booking agent will contact you to discuss the possibility of booking entertainment for your wedding.

The English actor and comedian John Cleese was born in 1939 in Somerset, England. As a young student, John excelled both academically and on the athletic field, becoming a cricket player and boxer. Following his graduation, Cleese taught briefly before studying law at Downing College, Cambridge. While at Cambridge, John began spending a lot of time at the theatrical clubs and began to develop a love of theater and comedy.

Cleese’s earliest gigs were as a writer for the Cambridge Circus, which toured internationally after a hugely successful debut on the London West End stage. The traveling brought John to the United States, where he began performing in various off-Broadway plays. It is here that he met Terry Gilliam, but long before the two would reunited as Monty Python members, Cleese returned to England to join the cast of I’m Sorry, I’ll Read That Again, and then after that The Frost Report in 1965. The Frost Report would go on to become John Cleese’s major breakthrough as a talented sketch comedian.

In 1969, John Cleese became a member of Monty Python’s Flying Circus, a BBC Television series which would change the nature of sketch comedy for the entire era. Cleese’s notable characters become iconic, and set the stage for the films: Monty Python and the Holy Grail; Monty Python’s Life of Brian; and Monty Python’s the Meaning of Life. The films brought Cleese recognition at an international level, as they were hugely popular in the United States, but in the UK it was on the series Fawlty Towers that he became a most beloved comedian in his own country. The series ran only twelve episodes, but garnered the industry’s most prestigious awards.

In the 1980’s and 1990’s, John Cleese shifted his attention to the big screen, appearing in such films as a Fish Called Wanda. In the new millennium, Cleese has continued to act in a variety of films, including some of the Harry Potter blockbusters, but he also served for seven years a visiting professor for Cornell University and toured with his own live show, John Cleese – His Life, Times, and Current Medical Problems. He has also contributed to The Spectator as a writer, and launched another comedy tour in 2011. Most recently, Cleese embarked on his first Canadian tour, performing his show John Cleese: Last Time to See Me Before I Die in Ottowa, Halifax, Calgary, Toronto, and Vancouver.