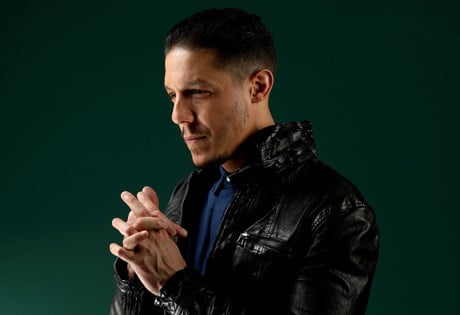 WeddingEntertainment.com makes it easy and trouble-free to check availability and pricing for booking Theo Rossi or any act in the business for your wedding. If we don't book an act for you, our service is free. For over 26 years we have booked and produced thousands of events for our clients worldwide. We can also handle everything necessary to produce the show for one all-inclusive price so there are no surprises. Simply fill out an entertainment request form and a booking agent will contact you to discuss the possibility of booking entertainment for your wedding.

Long before Theo Rossi rose to fame as the character of Juan Carlos Ortiz on the hit series Sons of Anarchy, he was born John Theodore Rossi in 1975 in Staten Island, New York. As a young man, Theo studied acting in New York and attended college at SUNY Albany in the early 1990’s, but he moved to Los Angeles in 1999 to pursue a full-time career as an actor.

Rossi’s earliest roles were in a variety of commercials, including Bud Light and Mcdonald’s. Roles in the movies Cloverfield, Kill Theory, and Red Sands followed, and roles on the small screen in NYPD Blue, American Dreams, Veronica Mars, Bones, and Grey’s Anatomy. But it was his breakthrough role on FX’s Sons of Anarchy that solidified Theo Rossi’s career, launching a career that has since taken off at lightning speed.

In addition to his role on Sons of Anarchy, Rossi has still appeared in smaller roles on a number of television shows, including: CSI: Miami, Lie to Me, Hawaii Five-O, and Law & Order: Special Victims Unit. He also founded his own production company, Dos Dudes Pictures, which currently has both a feature and a documentary in development.

When he is not involved in film and television projects, Theo Rossi is an active supporter of our men and women in the military, serving as ambassador to the Boot Campaign and helping to raise funds and awareness for those returning from the front lines and suffering with PTSD. He was also recently very active in supporting Staten Island in its recoveries after Hurricane Sandy, rebuilding homes and supporting the members of the community in which he was raised.