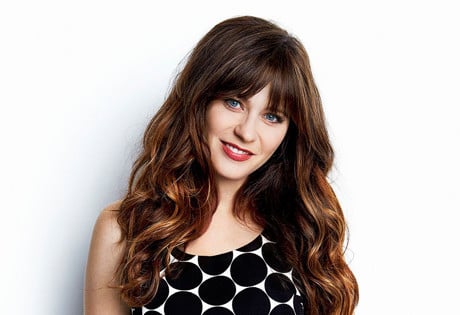 WeddingEntertainment.com makes it easy and trouble-free to check availability and pricing for booking Zooey Deschanel or any act in the business for your wedding. If we don't book an act for you, our service is free. For over 26 years we have booked and produced thousands of events for our clients worldwide. We can also handle everything necessary to produce the show for one all-inclusive price so there are no surprises. Simply fill out an entertainment request form and a booking agent will contact you to discuss the possibility of booking entertainment for your wedding.

American actress Zooey Deschanel was born in 1980 in Los Angeles, California. That Zooey would grow up to become an actress is little surprise; she was immersed in the world of entertainment through her father, cinematographer Caleb Deschanel and her mother, actress Mary Jo Deschanel. Zooey traveled with her father on location throughout her childhood, and the experiences had an indelible effect on her upbringing; by the time she was in her early teens, she knew she wanted to be an actress.

Zooey’s early credits include small roles on television and in film, until in 2000 she was cast in a supporting role in Cameron Crowe’s film Almost Famous. The film was critically lauded, and Deschanel’s performance along with it, setting the stage for appearances in The Good Girl, Abandon, The New Guy, House Hunting, and All the Real Girls, which earned Deschanel a Mar del Plata International Film Festival award for Best Actress and a nomination from the Independent Spirit Awards.

Today, Zooey Deschanel is best known for her Emmy-nominated role on the hit television series New Girl. Her most recent film role, in the animated feature Trolls (2016), features her vocals on the songs “Hello,” “I’m Coming Out,” “Mo Money Mo Problems,” and “Can’t Stop the Feeling!”