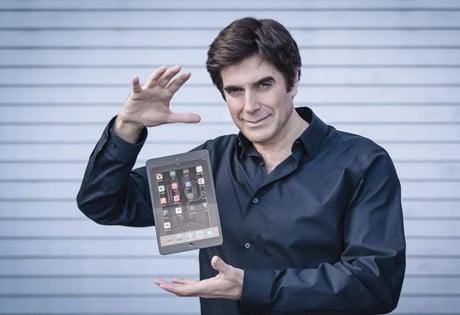 Look no further than WeddingEntertainment.com! We make it easy and stress-free to check availability and pricing for booking David Copperfield or any other act in the business. With over 26 years of experience in the industry, we have booked and produced thousands of events for clients worldwide.

American illusionist David Copperfield was born David Seth Kotkin in 1956 in New Jersey. Young David grew up enamored by the art of magic, and began practicing the art when he was still in elementary school, entertaining family, friends and neighbors. David became the youngest person ever to enter the Society of American Magicians at the age of twelve, and so it’s no surprise that by the time he’d graduated from high school, he immediately began to pursue a career in the art of magic.

David adopted the stage name David Copperfield and embarked on his first gig, in the musical “The Magic Man,” in Chicago. Although only eighteen at the time, his performance was an enormous hit, and he was credited with also creating most of the original illusions featured in the show. By the age of nineteen, Copperfield was headlining in Hawaii at the Pagoda Hotel, but it was the television special, The Magic of ABC, which made him a household name after it aired in 1977.

Since that time, David Copperfield has grown to become one of the world’s most well-renowned illusionists. Listed by Forbes as the most commercially successful magicians or illusionists in history, Copperfield has sold more than forty million tickets to his shows so far in his career. David Copperfield has also earned nearly forty Emmy nominations for his television specials, with more than twenty wins. He also currently holds eleven Guinness World Records for largest stage illusions, show attendance, and earnings.

David Copperfield continues to perform, although he also spends much of his time overseeing Musha Cay an the Islands of Copperfield Bay, a chain of eleven islands in the Bahamas. The islands have hosted such high-profile celebrities as Oprah Winfrey and John Travolta.