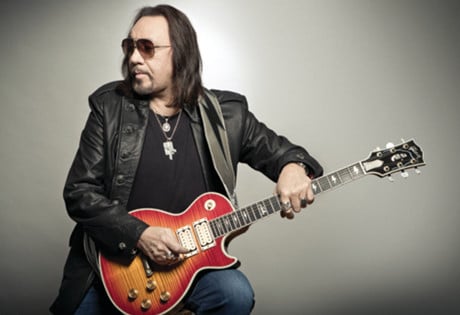 WeddingEntertainment.com makes it easy and trouble-free to check availability and pricing for booking Ace Frehley or any act in the business for your wedding. If we don't book an act for you, our service is free. For over 26 years we have booked and produced thousands of events for our clients worldwide. We can also handle everything necessary to produce the show for one all-inclusive price so there are no surprises. Simply fill out an entertainment request form and a booking agent will contact you to discuss the possibility of booking entertainment for your wedding.

Ace Frehley was born Paul Daniel Frehley in 1951 in the Bronx, New York. Long before he rose to fame as the lead guitarist and founding member of the band Kiss, Frehley grew up in a family of music-lovers and musicians. Ace was thirteen when his family bought him his first guitar as a Christmas present, and he immediately began a lifelong commitment to learning and perfecting the instrument.

While in high school, Ace Frehley established the band Cathedral, and once the band started to book consistent gigs, he dropped out of high school to focus on music full-time. Eventually, Ace returned to get his diploma, but for the next few years following he bounced from one band to another, until in 1972 he answered an ad for a guitarist with a newly formed band. Ace Frehley auditioned for Peter Criss, Gene Simmons, and Paul Stanley, and earned a spot as a guitarist for the newly formed band Kiss.  The band’s debut album released two years later, and the rest – as they say – is history.

Frehley reunited with Kiss in the mid 1990’s for a reunion tour, but only briefly, and for the better part of the 90’s and early 2000’s, he was rather quiet on the music front. But in recent years, Ace Frehley has made a comeback, releasing the album Anomaly in 2009 and, more recently, the highly successful Space Invader in 2014. The albums have spawned the singles “Outer Space” and “Gimme a Feelin.” Today, Ace Frehley continues to perform and record, and is currently listed at the top of Guitar World’s Greatest Metal Guitarists of All Time.