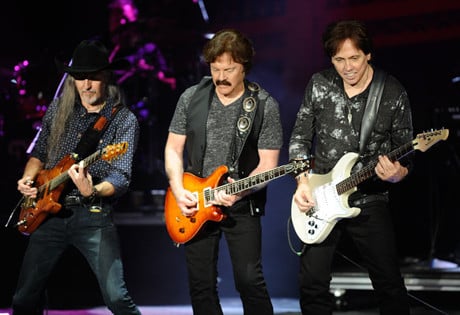 Looking to book The Doobie Brothers entertainment for a wedding anywhere worldwide?

WeddingEntertainment.com makes it easy and trouble-free to check availability and pricing for booking The Doobie Brothers or any act in the business for your wedding. If we don't book an act for you, our service is free. For over 26 years we have booked and produced thousands of events for our clients worldwide. We can also handle everything necessary to produce the show for one all-inclusive price so there are no surprises. Simply fill out an entertainment request form and a booking agent will contact you to discuss the possibility of booking entertainment for your wedding.

With iconic hits such as “Black Water,” China Groove,” and “Long Train Runnin’,” the Doobie Brothers are synonymous with that breezy California pop sound that gained popularity in the 1970’s and has lasted throughout the decades following.
It was the group’s second album, Toulouse Street, that would begin to garner them some attention, with songs like “Jesus is Just Alright,” and “Listen to the Music.” Their third album, The Captain and Me, offered more Top Ten hits in 1973, and the Doobie Brothers’ fourth album, What Were Once Vices are Now Habits, would finally bring them a number one hit with “Black Water” in 1974.

The Doobie Brothers’ sound changed with the arrival of Michael McDonald and Jeff Baxter in 1975, and the album Stampede marked a more urban sound for the group. Takin’ it to the Street became a platinum seller in 1976, and later that year, the Doobie Brothers released The Best of the Doobies. 1977 brought Livin’ on the Fault Line, and 1980 One Step Closer, with the Top Ten single “Real Love.” After a hiatus, the Doobie Brothers reunited again in 1987 with a short tour and a reunion album in 1989. Cycles brought the Top Ten hit “The Doctor” and went gold.

Today, in the new millennium, the Doobie Brothers have undergone a number of changes since various members left the group due to illness or other personal circumstances. Today, the group continues to perform, record, and tour with the current lineup of Tom Johnston, Patrick Simmons, and John McFee. In recent years, the Doobie Brothers have toured alongside other notable bands such as Chicago, and they have released two new albums with completely new material – World Gone Crazy (2010) and Southbound (2014.)

Most recently, the Doobie Brothers re-entered the studio to begin work on their next studio album, scheduled for release in the spring of 2018. So far in their career, the Doobie Brothers have sold over forty million albums worldwide. The group was inducted to the Vocal Group Hall of Fame in 2004.