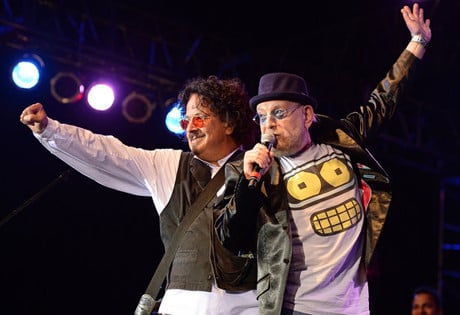 Look no further than WeddingEntertainment.com! We make it easy and stress-free to check availability and pricing for booking Turtles featuring Flo and Eddie or any other act in the business. With over 26 years of experience in the industry, we have booked and produced thousands of events for clients worldwide.

Mark Volman and Howard Kaylan were both born in 1947 and grew up in the same neighborhood, attending Westchester High School in Los Angeles. As teenagers, they sang in the choir, and established the Crossfires in 1963. The band found a break two years later when they caught the attention of a manager who would eventually encourage them to change their name to the Turtles and negotiate a record contract for them. Their first single, a cover of “It Ain’t Me, Babe” hit the Top 10 in 1965. “Let Me Be” and “You Baby” also charted in the year following, and then came their biggest hit, “Happy Together.”

For the next decade, the Turtles also scored moderate hits with “She’d Rather Be with Me,” “You Know What I Mean,” “The Story of Rock and Roll,” “Elenore,” “You Don’t Have to Walk in the Rain,” “Love in the City,” “You Showed Me,” and “She’s My Girl.” By the mid-1970’s, however, the group had nearly dissolved, even though the Turtles featuring Flo and Eddie did continue touring between 1975 and 1981, and as a duo they contributed to some session work and composed for a number of children’s movies.

The Turtles featuring Flo and Eddie continue to tour in the new millennium, mainly on the oldies circuit and much to the delight of their fans. Overall, the Turtles were among the most iconic groups of the late 1960’s and their contribution to the period is long lasing.