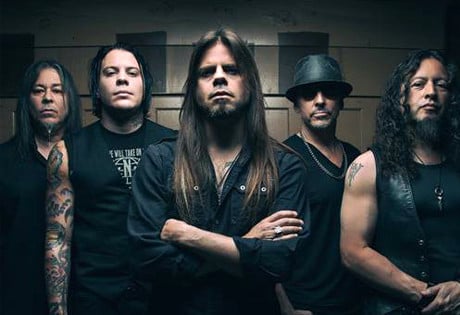 Looking to book Queensryche entertainment for a wedding anywhere worldwide?

Look no further than WeddingEntertainment.com! We make it easy and stress-free to check availability and pricing for booking Queensryche or any other act in the business. With over 26 years of experience in the industry, we have booked and produced thousands of events for clients worldwide.

The heavy metal band Queensryche was established in the early 1980’s, but its beginnings go back to the 1970’s, when musicians Michael Wilton, Chris DeGarmo, Scott Rockenfield, and Eddie Jackson began performing around the Seattle area as members of a variety of different bands, often crossing paths with one another.

Eventually, Michael, Chris, Scott, and Eddie came together to form Queensryche, releasing their demo as a self-titled EP in 1983. Queensryche created quite a buzz, and after bringing in Geoff Tate as a lead singer, the band garnered the attention of EMI Records, signed with the label, and re-released their EP as a major-label debut. Queensryche rose into the Billboard charts, hitting the top 100, and the band embarked on a number of tours to further support their beginnings.

After returning, Queensryche returned to the studio to record The Warning, their first full-length work, which released in 1984. Rage for Order followed in 1986, and then Operation: Mindcrime (1988), but it was the album Empire (1990) which became a breakthrough hit for Queensryche.  The album rose into the top ten on the charts and reached multi-platinum status, spawning the hit single “Silent Lucidity,” which also became a first top ten for Queensryche. Since that time, Queensryche has released the albums: Promised Land (1994), Hear in the Now Frontier (1997), Q2K (1999), Tribe (2003), Operation: Mindcrime II (2006), Take Cover (2007), American Soldier (2009), and Dedicated to Chaos (2011.) The albums spawned the addition rock hits “Another Rainy Night (Without You),” “Anybody Listening?,” “Real World,” “I Am I,” “Bridge,” “Sign of the Times,” “You,” and “Breakdown.”

Queensryche has sold more than twenty million albums worldwide and earned three Grammy nominations thus far. Unrest within the group has recently resulted in a split for the band, with a version of Queensryche headed by Todd La Torre competing with a version of the band headed by Geoff Tate. Each band’s version has released a 2013 album with their current lineup (Queensryche and Frequency Unknown, respectively), and legal proceedings are underway to determine which band will be permitted to retain the title Queensryche in the future.