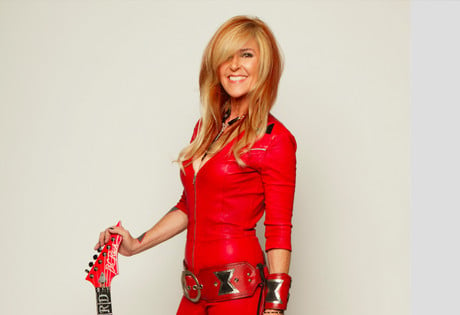 WeddingEntertainment.com makes it easy and trouble-free to check availability and pricing for booking Lita Ford or any act in the business for your wedding. If we don't book an act for you, our service is free. For over 26 years we have booked and produced thousands of events for our clients worldwide. We can also handle everything necessary to produce the show for one all-inclusive price so there are no surprises. Simply fill out an entertainment request form and a booking agent will contact you to discuss the possibility of booking entertainment for your wedding.

Lita Ford was born in 1958 in London, England. Ford rose to fame as the guitarist for the Runaways, after being recruited for the band in the mid 1970’s. After the band dissolved in the 1980’s, Lita embarked on her own solo career, releasing her debut album Out for Blood in 1983. The album did not fare well, however, although it did pave the way for her 1984 album Dancin’ on the Edge, which enjoyed a bit of commercial success.

Dancin’ on the Edge spawned the singles “Gotta Let Go” and “Fire in My Heart,” both of which rose into the charts, the latter all the way to the number one spot. Shortly thereafter, Lita signed with RCA Records and released her third album effort, Lita, in 1988. Lita was far more successful than its predecessors, spawning a series of chart-topping hits: “ Kiss Me Deadly,” “Close My Eyes Forever,” “Back to the Cave,” “Close My Eyes Forever,” and “Falling In and Out of Love.”

Additional albums and singles followed: Stiletto (1990), Dangerous Curves (1991), Black (1995), Wicked Wonderland (2009), “Hungry,” “Lisa,” “Shot of Poison,” “Playing with Fire,” “Larger than Life,” “Killin’ Kind,” and “Crave.” Most recently, Lita Ford released the album Living Like a Runaway, shortly after the release of the feature film The Runaways, which chronicled her years with the band of the same name. The album spawned the singles “Living Like a Runaway” and “Mother.”

Florence And The Machine Learn More >