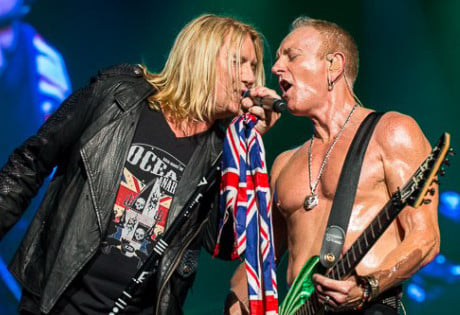 WeddingEntertainment.com makes it easy and trouble-free to check availability and pricing for booking Def Leppard or any act in the business for your wedding. If we don't book an act for you, our service is free. For over 26 years we have booked and produced thousands of events for our clients worldwide. We can also handle everything necessary to produce the show for one all-inclusive price so there are no surprises. Simply fill out an entertainment request form and a booking agent will contact you to discuss the possibility of booking entertainment for your wedding.

Def Leppard was founded in the late 1970’s in Sheffield, England, when teenagers Rick Savage and Pete Willis added Joe Elliott and T. Rex to their lineup and began playing around local pubs. Def Leppard’s self-released debut album, Getcha Rocks Off, arrived in 1978, and the popularity of the album earned the band some local buzz, radio airplay, and the recording contract they’d been seeking.

Def Leppard released On Through the Night in 1980 and the album made some headway on the US charts. Supporting tours with Sammy Hagar, Ozzy Osbourne, and Judas Priest helped the band establish a stronger fan base in the US and abroad, and by the time High’n’Dry was released in 1981, Def Leppard was a constant presence on MTV. The album became the first to go platinum in the US, but it would be Def Leppard’s fourth release which would rocket them to stardom.

Pyromania (1983), featuring the hits “Rock of Ages,” and “Photograph,” ultimately sold ten million copies and established Def Leppard as worldwide rock stars. A few changes to the lineup followed over the coming years, including challenges faced by Rick Allen (drums), after the loss of his arm, but Def Leppard went on to release a series of hit albums for the rest of the next two decades: Hysteria (1987), Adrenalize (1992), Slang (1996), and Euphoria (1999), collectively featuring the hit singles "Animal," "Hysteria," "Love Bites," "Armageddon It," "Rocket," "Pour Some Sugar on Me," "Let's Get Rocked," "Make Love Like a Man,” and "Have You Ever Needed Someone So Bad.”

In the new millennium, Def Leppard continued its success, with the release of X (2002), Yeah! (2006), Songs from the Sparkle Lounge (2008), and Mirrorball: Live and More (2011.) With the current lineup of Rick Savage, Joe Elliott, Rick Allen, Phil Collen, and Vivian Campbell, Def Leppard begins a run of nine shows at the Hard Rock Hotel and Casino in Vegas in the spring of 2013.  In total, the band has sold more than one hundred million albums and earned top stops on a series of “greatest” lists, including the 100 Greatest Artists of All Time and VH1’s 100 Greatest Artists of Hard Rock.

Def Leppard continues to tour and perform with the current lineup of Joe Elliot, Rick Savage, Rick Allen, Phil Collen, and Vivian Campbell. The band’s latest album, Def Leppard, arrived in 2015 and was followed by a two year worldwide tour with bands such as Tesla, Styx, and Whitesnake. A another tour in 2018, co-headlining with Journey, took Def Leppard throughout North America to perform in front of more than a million fans.