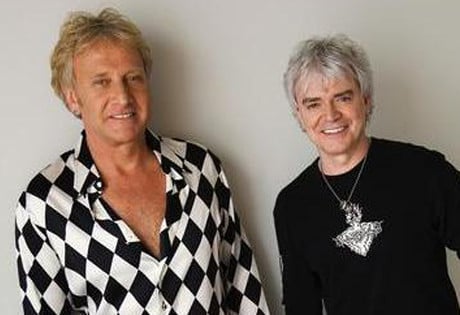 WeddingEntertainment.com makes it easy and trouble-free to check availability and pricing for booking Air Supply or any act in the business for your wedding. If we don't book an act for you, our service is free. For over 26 years we have booked and produced thousands of events for our clients worldwide. We can also handle everything necessary to produce the show for one all-inclusive price so there are no surprises. Simply fill out an entertainment request form and a booking agent will contact you to discuss the possibility of booking entertainment for your wedding.

Graham Russell and Russell Hitchcock met in Sydney, Australia in 1976. The two were participating in a production of Jesus Christ Superstar, and quickly formed a friendship and partnership. Air Supply was finally born with the addition of drummer Ralph Cooper, keyboardist Frank Esler-Smith, bassist David Green, and guitarist David Moyse.

In the late 1970’s, Rod Stewart invited Air Supply to join him as his opening act on his tour, thus bringing the band to international exposure. Air Supply’s debut album, Lost in Love, became a major success, with the hit singles "All Out of Love," "Lost in Love," "Every Woman in the World" and other singles selling collectively over two million copies.

The One That You Love brought Air Supply their first number one hit with the single “The One That You Love,” and also brought audiences "Sweet Dreams” and "Here I Am (Just When I Thought I Was Over You.)" The single “Making Love Out of Nothing at All,” from Air Supply’s Greatest Hits collection (1983) brought the album to number seven, with over four million copies in sales. The single spent two weeks on the charts, at number two. Additional albums from Air Supply include Earth Is... (1991), Vanishing Race (1993), News From Nowhere (1995), and Now and Forever: Greatest Hits Live.

Air Supply has continued to tour and record into the new millennium. In 2008, based on their chart performance, Air Supply was ranked the 83rd best musical act of all time in Billboard Hot 100's 50th anniversary edition. On May 4th, 2010, Air Supply released the album Mumbo Jumbo, followed by the live albums Live in Jerusalem (2012) and Live in Hong Kong (2015.) The band has also released a number of compilation albums in the last few years, with the most recent, Air Supply 40th Anniversary, arriving in 2016 to mark the milestone year for the group. Air Supply continues to perform and record with their original lineup, with plans to hit the road again in 2017 and 2018.