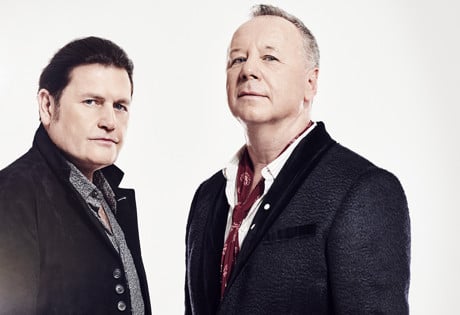 Look no further than WeddingEntertainment.com! We make it easy and stress-free to check availability and pricing for booking Simple Minds or any other act in the business. With over 26 years of experience in the industry, we have booked and produced thousands of events for clients worldwide.

The Scottish rock band Simple Minds was formed in 1977 in Glasgow. The group began as the punk band known as Johnny & the Self-Abusers, and became well-known in Scotland, performing frequently at summer concerts and small festivals. But the band eventually split into two sub-groups, with one group forming Simple Minds. With members Jim Kerr, Charlie Burchill, Brian McGee, Derek Forbes, and Mick MacNeil, Simple Minds went on to garner a deal with Arista Records, releasing the deubt album Life In a Day in 1979.

The album was a moderate success, rising into the top forty on the charts, but it did not spawn any significant singles. The album Real to Real Cacophony followed, presenting a slightly different new wave sound, and fared slightly better, but it was the 1982 album New Gold Dream (81-82-83-84) which became the breakthrough for Simple Minds, spawning the chart-topping singles “Glittering Prize,” “Promised You a Miracle,” “Colours Fly and Catherine Wheel,” and “Someone Somewhere in Summertime.” But the biggest commercial boost for Simple Minds came with the inclusion of their song “Don’t You (Forget About Me)” in the smash hit film Breakfast Club. Both the film and the song went on to become an anthem for a generation, and paved the way for success which would last well into the new millennium.

Simple Minds experienced a dip in popularity in the 1990’s, but resurfaced in 2010 to significant success. In recent years, Simple Minds has launched a series of successful tours and recently released an entirely new studio album, Big Music, their first in nearly a decade.