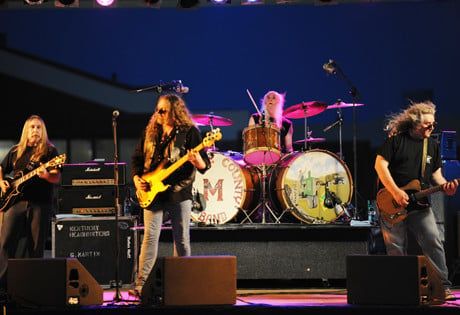 WeddingEntertainment.com makes it easy and trouble-free to check availability and pricing for booking Kentucky Headhunters or any act in the business for your wedding. If we don't book an act for you, our service is free. For over 26 years we have booked and produced thousands of events for our clients worldwide. We can also handle everything necessary to produce the show for one all-inclusive price so there are no surprises. Simply fill out an entertainment request form and a booking agent will contact you to discuss the possibility of booking entertainment for your wedding.

As Kentucky Headhunters, the group released a debut album, Pickin’ on Nashville, in 1989. The album featured the country hits “Walk Softly on This Heart of Mine,” “Dumas Walker,” “Oh Lonesome Me,” and “Rock n’ Roll Angel,” and brought the Kentucky Headhunters a Grammy Award for Best Country Performance by a Duo or Group with Vocals, in addition to two Country Music Association Awards, for Album of the Year and Vocal Group of the Year.

Although the band has undergone many changes to the lineup over the years, The Kentucky Headhunters continues to perform and record, with the lineup of: Greg Martin, Doug Phelps, Fred Young, and Richard Young. The band most recently released the album Meet Me In Bluesland, recorded with Johnnie Johnson, in 2015.