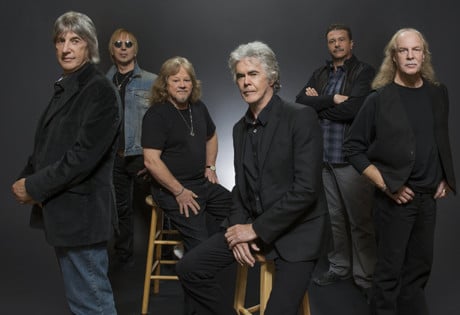 WeddingEntertainment.com makes it easy and trouble-free to check availability and pricing for booking Three Dog Night or any act in the business for your wedding. If we don't book an act for you, our service is free. For over 26 years we have booked and produced thousands of events for our clients worldwide. We can also handle everything necessary to produce the show for one all-inclusive price so there are no surprises. Simply fill out an entertainment request form and a booking agent will contact you to discuss the possibility of booking entertainment for your wedding.

Three Dog Night came together in 1968 when Cory Wells, Danny Hutton, Chuck Negron, Jimmy Greenspoon, Mike Allsup, Floyd Sneed, and Joe Schermie formed the band and quickly began releasing hits which climbed the charts. Between 1969 and 1975, starting with the single “One,” Three Dog Night placed twenty-one singles on the charts, eleven of them in the Top Ten.

The hits continued, with iconic songs such as "Mama Told Me (Not to Come),” "Joy to the World," "Black and White," and "The Show Must Go On." Three Dog Night released a series of albums throughout the remaining decades, including Suitable for Framing (1969), It Ain’t Easy (1970), Naturally (1970), Harmony (1971), Seven Separate Fools (1972), Cyan (1973), Hard Labor (1974), Coming Down Your Way (1975), and American Pastime (1976.) Unfortunately, Three Dog Night disbanded in the mid 1970’s, although a brief reunion occurred in the early 1980’s with the release of It’s a Jungle (1983.) But additional performances occurred throughout the new millennium, resulting in a live DVD, Live with the Tennessee Symphony Orchestra in 2002, and an Anniversary Hits Collection in 2004. The Complete Hit Singles was also released in 2004.