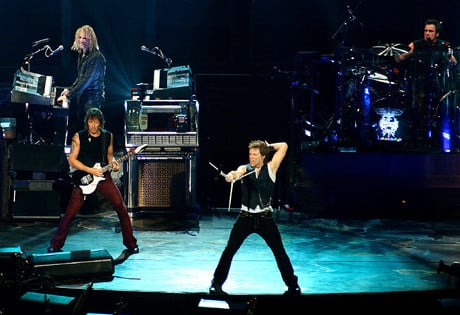 WeddingEntertainment.com makes it easy and trouble-free to check availability and pricing for booking Bon Jovi or any act in the business for your wedding. If we don't book an act for you, our service is free. For over 26 years we have booked and produced thousands of events for our clients worldwide. We can also handle everything necessary to produce the show for one all-inclusive price so there are no surprises. Simply fill out an entertainment request form and a booking agent will contact you to discuss the possibility of booking entertainment for your wedding.

In 1983 Bon Jovi exploded onto the music scene with a softer, more female-friendly version of the already popular Def Leppard sound. Utilizing songwriters whose talent employed the ability to give power ballads a new sound, and playing on Jon Bon Jovi’s striking good looks, the band quickly became MTV poster boys. 1986’s Slippery When Wet and 1988’s New Jersey both resulted in platinum status and made the band a household name.

Forgoing the spandex and hairspray of the early 1990’s, the band moved beyond the era by leaving behind the typical “hair-band” of the time and instead focused on big ballads and arena-rock in lieu of metal. This enabled Bon Jovi to be one of the few, if not the only such band of the 1980’s to keep a strong audience following well into the 1990’s and even beyond into the 21st century.

After releasing Have A Nice Day in 2005, and then Live from the Have A Nice Day Tour in 2005 and 2006, Bon Jovi released Lost Highway, their tenth studio album, in 2007.  Immediately finding a number one spot on the Billboard charts, Lost Highway became Bon Jovi’s third number one album in the US. It’s first single, "(You Want to) Make a Memory", peaked at number 27 on the Billboard Hot 100, the highest debut for Bon Jovi on the US charts. Later, the album reached number two in the UK and number one in Japan, Canada, Australia, and Europe.

When We Were Beautiful, a documentary on Bon Jovi, debuted at the Tribeca Film Festival in 2009.  Phil Griffin’s film records the peaks and valleys experienced by Bon Jovi over the course of twenty-five years. In June of 2009, Richie Sambora and Jon Bon Jovi were inducted into the Songwriter’s Hall of Fame.

Throughout their career, Bon Jovi has released a total of eleven studio albums, and enjoyed worldwide sales exceeding more than one hundred and thirty million records. Today, Bon Jovi continues to write, record, and tour.