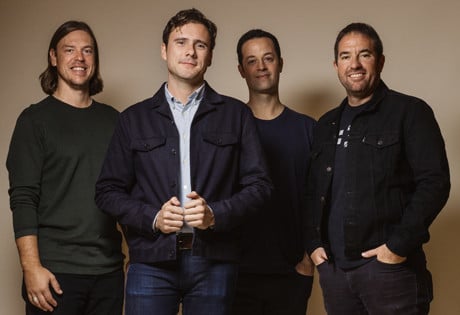 WeddingEntertainment.com makes it easy and trouble-free to check availability and pricing for booking Jimmy Eat World or any act in the business for your wedding. If we don't book an act for you, our service is free. For over 26 years we have booked and produced thousands of events for our clients worldwide. We can also handle everything necessary to produce the show for one all-inclusive price so there are no surprises. Simply fill out an entertainment request form and a booking agent will contact you to discuss the possibility of booking entertainment for your wedding.

Jimmy Eat World was established in the early 1990’s in Mesa, Arizona, when musicians and friends Jim Adkins, Zach Lind, Tom Linton, and Mitch Porter established their first punk rock band together and released the extended play One, Two, Three Four. The self-released album Jimmy Eat World followed in 1994, but it took quite a few years for the band to establish a following and achieve commercial success. Eventually, Jimmy Eat World caught the attention of Capitol Records, and the band signed with them in 1995.

Jimmy Eat World released its major label debut, Static Prevails, shortly thereafter. The albums spawned the singles “Rockstar” and “Call It in the Air,” and paved the way for the next album, Clarity (1999), but it was the album Bleed American in 2001 which spawned the hit single “The Middle,” which found a home on the rock and alternative charts in top ten spots. The additional albums Futures (2004), Chase This Light (2007), and Invented (2010) also fared well commercially, giving audiences the singles: “Sweetness,” “A Praise Chorus,” “Pain,” “Work,” “Futures,” “Big Casino,” “Always Be,” “My Best Theory,” and “Coffee and Cigarettes.”

Most recently, Jimmy Eat World released the album Damage in 2013, featuring the song “I Will Steal You Back.” Jimmy Eat World continues to record, perform, and tour, with the current lineup of Jim Adkins, Tom Linton, Zach Lind, and Rick Burch.