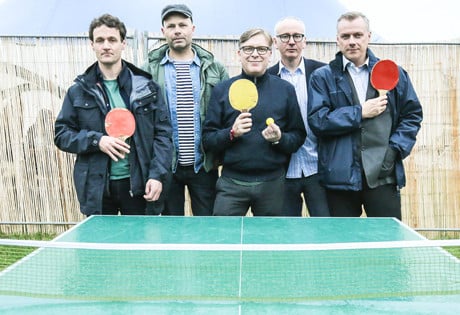 WeddingEntertainment.com makes it easy and trouble-free to check availability and pricing for booking Teenage Fanclub or any act in the business for your wedding. If we don't book an act for you, our service is free. For over 26 years we have booked and produced thousands of events for our clients worldwide. We can also handle everything necessary to produce the show for one all-inclusive price so there are no surprises. Simply fill out an entertainment request form and a booking agent will contact you to discuss the possibility of booking entertainment for your wedding.

The Scottish rock band known as Teenage Fanclub was established in 1989 in Bellshill. Musicians Norman Blake, Raymond McGinley, Gerard Love, Francis MacDonald, and Brendan O’Hare were highly influenced by music coming out of Glasgow at the time, and crafted a sound for Teenage Fanclub that harkens to the California sound of the Beach Boys.

Teenage Fanclub released their debut album, A Catholic Education, in 1990, and it was a moderate success in the United Kingdom. The group’s follow-up, The King, fared better in 1991, but it was the album Bandwagonesqe that finally landed on the mainstream charts in the United States and brought Teenage Fanclub to an international audience. Notable singles from the band’s first three albums include: “Star Sign,” “The Concept,” and “What You Do to Me.”

Teenage Fanclub continues to perform and record with the current lineup of Blake, McGinley, Love, MacDonald, and Dave McGowan on keyboards and guitar; McGowan joined the group in 2004. Teenage Fanclub’s most recent release, the album Here,” arrived in 2016 and reached into the top ten in the UK.