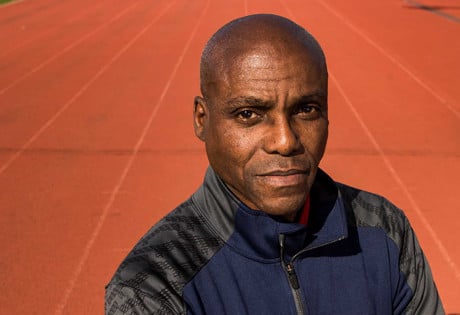 WeddingEntertainment.com makes it easy and trouble-free to check availability and pricing for booking Carl Lewis or any act in the business for your wedding. If we don't book an act for you, our service is free. For over 26 years we have booked and produced thousands of events for our clients worldwide. We can also handle everything necessary to produce the show for one all-inclusive price so there are no surprises. Simply fill out an entertainment request form and a booking agent will contact you to discuss the possibility of booking entertainment for your wedding.

American track and field legend Carl Lewis was born Frederick Carlton Lewis in 1961 in Birmingham, Alabama. Lewis grew up inspired by the world of sports, as his parents ran a local athletics club. Carl and his siblings began competing as runners and jumpers, quickly distinguishing themselves for their talents. By the time he was a teenager, Carl Lewis had materialized as one of the nation’s most outstanding athletes, and was courted by multiple universities for scholarships.

Ultimately, Lewis chose the University of Houston, where he went on to continue competing in the long jump, but also as a sprinter. After qualifying for the 1980 Olympics, Carl Lewis suffered the disappointment of the American boycott which did not bring him to Moscow but instead he competed against other nations boycotting the event. It was there that he won a Bronze medal and a Gold medal, for the long jump and the one hundred meter relay.

Carl Lewis went on to win ten more Olympic medals throughout his career, in addition to ten World Championship medals. His accomplishments as an athlete brought him numerous award recognitions, including: the Athlete of the Year title from Track & Field News for three straight years; the Sportsman of the Century title from the International Olympic Committee; and the World Athlete of the Century award by the International Association of Athletics Federations.

Since his retirement from athletics, Carl Lewis has gone on to appear in a number of films and to pursue a career as a politician, attempting a run for the New Jersey Senate. Today, Lewis owns his own marketing company and also speaks publicly in support of veganism; he had adopted a vegan diet in the early 1990’s and credits the healthy lifestyle to his improved athletic performances during that time.