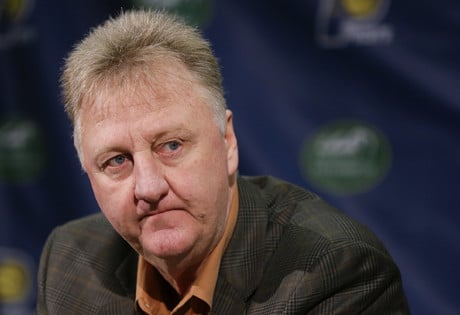 WeddingEntertainment.com makes it easy and trouble-free to check availability and pricing for booking Larry Bird or any act in the business for your wedding. If we don't book an act for you, our service is free. For over 26 years we have booked and produced thousands of events for our clients worldwide. We can also handle everything necessary to produce the show for one all-inclusive price so there are no surprises. Simply fill out an entertainment request form and a booking agent will contact you to discuss the possibility of booking entertainment for your wedding.

Retired professional basketball legend Larry Bird was born in 1956 in West Baden, Indiana. Bird grew up in poverty, with his single mother working multiple jobs to support the family’s six children. As an escape from the difficulties of his home, Bird began to play basketball, and very quickly found that he had a unique talent for the sport.

Larry Bird grew to become his high school’s scoring leader, garnering the attention of the Indiana Hoosiers after his graduation. But Bird was unhappy with his life in the larger city of Bloomington, and so in 1975 he returned to attend Indiana State University. Bird became one of the Sycamore’s most valuable players, bringing the team to a championship against Michigan State. Just before graduation, Larry Bird was chosen by the Boston Celtics in the NBA Draft of 1978, but did not begin playing for them until after his final season at Indiana State concluded. Since that time, NBA rules have changed so that players are not permitted to sign until they are ready to play; the rule was named the Bird Collegiate Rule, after Larry Bird.

With the Celtics, Larry Bird went on to become one of the nation’s most successful basketball players, earning two NBA Finals Most Valuable Player Awards and bringing the team to three NBA championships. Bird also played for the United States Men’s Basketball Team (the “Dream Team”) at the Olympics in 1992. Other notable achievements during his playing career include: NBA Rookie of the Year for 1980; John R. Wooden Award in 1979; Naismith College Player of the Year Award in 1979; AP National Player of the Year in 1979; and the Adolph Rupp Trophy for 1979.

After retiring from the game as a player, Larry Bird went on to coach the Indiana Pacers from 1997 to 2000, and then afterwards becoming president of their operations. During his time as coach, Bird led the team to its best record as an NBA team at the time, earning for himself the award for NBA Coach of the Year.

Larry Bird’s likeness and personality have also become a frequent part of pop culture references. Known frequently for his “trash talk” attitude on the court, his personality has appeared in films, video games, and commercials, including: the movie Space Jam (1996); the video games One on One: Dr. J vs. Larry Bird and Jordan vs. Bird: One on One; and in a Super Bowl XLVI commercial. Bird has also co-authored the book When the Game Was Ours (with Magic Johnson), and a little known fact is that the Twitter logo (the bird) is named Larry, in Bird’s honor.