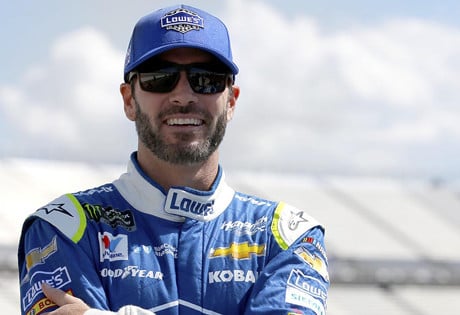 WeddingEntertainment.com makes it easy and trouble-free to check availability and pricing for booking Jimmie Johnson or any act in the business for your wedding. If we don't book an act for you, our service is free. For over 26 years we have booked and produced thousands of events for our clients worldwide. We can also handle everything necessary to produce the show for one all-inclusive price so there are no surprises. Simply fill out an entertainment request form and a booking agent will contact you to discuss the possibility of booking entertainment for your wedding.

The American stock car racer Jimmie Johnson was born in 1975 in El Cajon, California. Johnson began racing motorcycles when he was only four years old. By the time he had reached high school, Jimmie had grown into an excellent all-around athlete, playing on his school’s swimming team and water polo team, but after graduation he returned to racing, competing in off-road series.

After graduating, Jimmie began to compete in a number of off-road competitions. By the late 1990’s, he had moved into stock car racing, winning the NASCAR Spring Cup Series six times. Other notable achievements by Johnson include: ranking eighth in the NASCAR Cup Series winners; winning the Driver of the Year award for 2006, 2007, 2008, 2010, and 2013; and becoming the only driver to qualify every single year for the Chase for the Sprint Cup. Off the racing track, Johnson has appeared on the television shows Repeat After Me, Las Vegas and the HBO reality series 24/7, in which his 2010 race at the Daytona 500 was documented for viewers. He has also served as a host for SportsCenter on ESPN.

In 2006, Jimmie Johnson started his own foundation which has as its goal to help communities and families in need. The foundation collaborates with other notable organizations such as the Make-A-Wish Foundation and Habitat for Humanity to help bring resources to those who might benefit from them.

Currently, Jimmie Johnson drives the No. 48 Chevrolet SS in the NASCAR Sprint Cup Series. In 2009, Johnson received the Associate Press Male Athlete of the Year Award, becoming the first race car driver to do so.