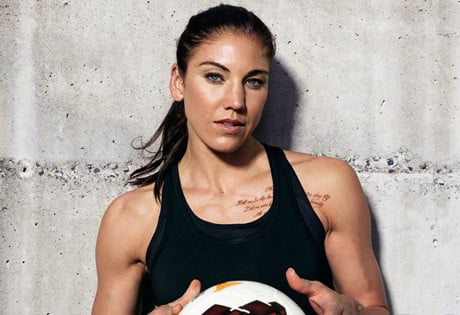 WeddingEntertainment.com makes it easy and trouble-free to check availability and pricing for booking Hope Solo or any act in the business for your wedding. If we don't book an act for you, our service is free. For over 26 years we have booked and produced thousands of events for our clients worldwide. We can also handle everything necessary to produce the show for one all-inclusive price so there are no surprises. Simply fill out an entertainment request form and a booking agent will contact you to discuss the possibility of booking entertainment for your wedding.

The American soccer player Hope Solo was born in 1981 in Richland, Washington. Hope learned to play soccer from her father, and she quickly demonstrated a knack for the sport when she was young. By the time she was a high school student, Hope had led her team to multiple titles and championships. Her talents caught the attention of multiple universities, and she ultimately accepted an offer from the University of Washington, where she served as the soccer team’s goalkeeper and majored in speech communications.

Since 2002, Hope Solo has been the United States Women’s National Soccer Team goalkeeper. Solo has also played for the Women’s United Soccer Association and Women’s Professional Soccer. Today, she plays for the Seattle Reign FC in the National Women’s Soccer League. Her talents have today made her one of the top female goalkeepers internationally, and she has brought the United States team to gold medals in the 2008 and 2012 Summer Olympic Games. In the 2011 FIFA Women’s World Cup, Hope Solo distinguished herself as recipient of the Golden Glove award for best goalkeeper, even though the United States ultimately lost to Japan.

As one of the nation’s most recognizable female athletes, Hope Solo’s likeness graces the covers of some of the world’s most notable magazines, including: Vogue, Newsweek, Sports Illustrated, ESPN the Magazine, and Fitness Magazine. Her multiple endorsement deals include ones with: Bank of America, Seiko, Gatorade, BlackBerry, and Nike, to name a few. Her philanthropic endeavors include serving as a representative for the Women’s Sports Foundation and donations to the Boys and Girls Club of America.

Today, Hope Solo holds multiple goalkeeper records for U.S. players. She most recently competed on Dancing with the Stars, performing with Maksim Chmerkowskiy and making it all the way to the semifinals. Solo’s autobiography, Solo: A Memoir of Hope, was published in 2012.