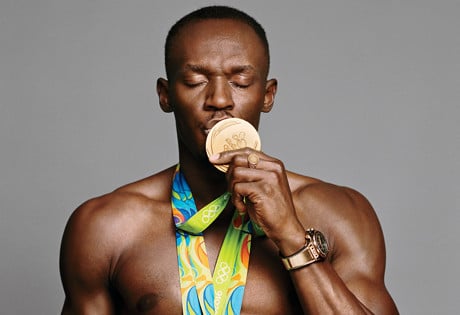 WeddingEntertainment.com makes it easy and trouble-free to check availability and pricing for booking Usain Bolt or any act in the business for your wedding. If we don't book an act for you, our service is free. For over 26 years we have booked and produced thousands of events for our clients worldwide. We can also handle everything necessary to produce the show for one all-inclusive price so there are no surprises. Simply fill out an entertainment request form and a booking agent will contact you to discuss the possibility of booking entertainment for your wedding.

International sprinting sensation Usain Bolt was born in 1986 in Jamaica. Bolt rose to worldwide fame and prominence after he became the first runner to win both the one hundred meter and two hundred meter titles in to consecutive Olympic years – 2008 and 2012. Although he has now grown to become an inspiration for runners and athletes in general, Bolt’s life began humbly, in the rural area of Trelawny, Jamaica.

Usain grew up with his parents and two siblings, and started off playing football and cricket when he was still pre-school age. By the time he was in elementary school, his talents as a runner were already growing more and more evident. By the age of twelve, Usain had grown to become the fastest runner in his area, and in high school, he began running for track and field events at his school.  Bolt’s first international competition on the world stage was in Hungary, at the IAAF World Youth Championships in 2001. Racking up numerous world championships at the junior level, Usain Bolt was eventually moved to Kingston, Jamaica, with the support of the Prime Minister, so that he could better prepare and train with the Jamaica Amateur Athletic Association.

Usain Bolt has enjoyed sponsorships with such high profile companies as Puma, Gatorade, and Virgin Media. Bolt published his autobiography, My Story: 9.58: Being the World’s Fastest Man, in 2010. Although Usain Bolt has stated that he plans to retire within the next few years, his status as a public figure continues to climb. Most recently, Bolt appeared in an opening sketch on Saturday Night Live, in which he parodied his own achievements much to the delight of the audience.