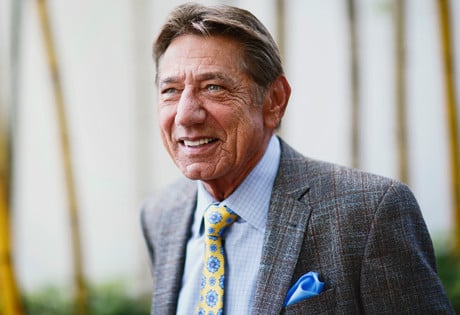 WeddingEntertainment.com makes it easy and trouble-free to check availability and pricing for booking Joe Namath or any act in the business for your wedding. If we don't book an act for you, our service is free. For over 26 years we have booked and produced thousands of events for our clients worldwide. We can also handle everything necessary to produce the show for one all-inclusive price so there are no surprises. Simply fill out an entertainment request form and a booking agent will contact you to discuss the possibility of booking entertainment for your wedding.

Joe Namath was born in 1943 and grew up in Beaver Falls, Pennsylvania. Namath excelled as an athlete while in high school, playing baseball, basketball, and football. Although he received offers to play pro baseball immediately after high school, Joe Namath instead accepted a football scholarship to the University of Alabama, playing for the Crimson Tide program between 1962 and 1964.

Joe Namath left college to play for the New York Jets. During his time with the Jets, Namath was four times an American Football League All-Star, and he brought the team to victory in the third Super Bowl in 1969. Joe Namath finished his football career with the Los Angeles Rams, and then went on to a number of other successful endeavors.

In the 1970’s, Joe Namath began an acting career, appearing in a number of movies and television shows, including The Love Boat, Here’s Lucy, The Brady Bunch, The Simpsons, Married… with Children, and The A-Team. Throughout the 1980’s, Namath could also be seen as a commentator for NFL broadcasts. Today, Joe Namath is still one of America’s most celebrated athletic icons, and he remains one of football’s most recognizable legends.