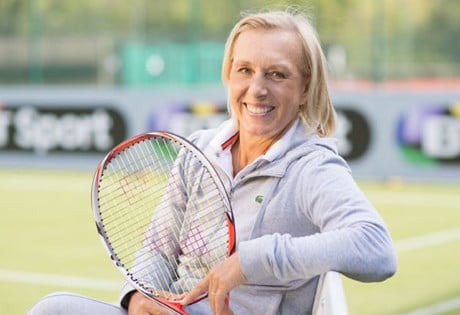 WeddingEntertainment.com makes it easy and trouble-free to check availability and pricing for booking Martina Navratoliva or any act in the business for your wedding. If we don't book an act for you, our service is free. For over 26 years we have booked and produced thousands of events for our clients worldwide. We can also handle everything necessary to produce the show for one all-inclusive price so there are no surprises. Simply fill out an entertainment request form and a booking agent will contact you to discuss the possibility of booking entertainment for your wedding.

The famous Czech American tennis player Martina Navratilova was born in 1956 in Prague, Czechoslovakia. Martina was raised mainly by her mother, who herself was an accomplished athlete, and following her parent’s divorce, Martina began to play tennis under the tutelage of her stepfather. By the time Martina was four years old, she was already showing signs of the tremendous talent she would exhibit as a teenager.

Navratilova began playing tennis regularly when she was about seven. Her first national championship was at the age of fifteen, and at sixteen she made her first appearance on a United States professional tour. Martina’s first professional singles title was earned at the age of seventeen, and it was the start of a career which would last for decades and bring her the number one singles title for a staggering 332 weeks straight.

Throughout the course of her career, Martina Navratilova won the Wimbledon singles final twelve times, and won eighteen Grand Slam singles titles. She broke the record for major women’s doubles titles with thirty-one titles, and holds a number of other records. Tennis historians often refer to Navratilova as one of the greatest tennis players of all time. In 2005, she was selected by Tennis magazine as the greatest female tennis player for the period between 1965 and 2005.

Although retired, Martina Navratilova continues to be an active public figure and a supporter of a number of charities and organizations, especially those that benefit underprivileged children, animal rights, and gay rights. Martina also serves on the Health and Fitness Ambassador committee for AARP, helping to ensure that individuals of retirement age continue to lead healthy, active lives.