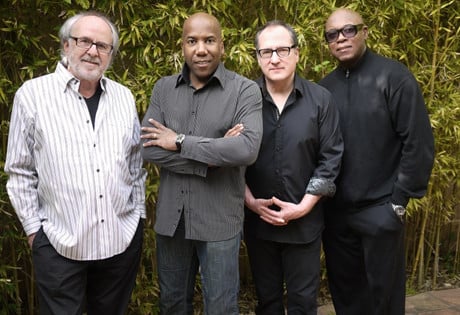 Looking to book Fourplay entertainment for a wedding anywhere worldwide?

Look no further than WeddingEntertainment.com! We make it easy and stress-free to check availability and pricing for booking Fourplay or any other act in the business. With over 26 years of experience in the industry, we have booked and produced thousands of events for clients worldwide.

The jazz quartet known as Fourplay was established in the late 1980’s by founding members Harvey Mason, Nathan East, Lee Ritenour, and Bob James. The group has become known for its blend of pop, R&B, and jazz, a unique formula which has tremendous appeal to the mainstream audience.

Fourplay signed with Warner Bros. Records and released a self-titled debut album in 1991, which went on to rise to the number one spot on the contemporary jazz charts and sell more than a million copies.  The group has followed with more than a dozen albums since, including: Between the Sheets (1993), Elixir (1995), 4 (1998), Snowbound (1999), Yes, Please! (2000), Journey (2004), Energy (2008), and Let’s Touch the Sky (2010.) Fourplay also has three best-selling DVDs of their live performances, including shows from the San Javier Jazz Festival and a performance in Cape Town.

Fourplay’s most recent album release is Espirit de Four, which arrived in 2012. Fourplay continues to perform and record with the current lineup of James, East, Mason, and Chuck Loeb, who replaced Ritenour after he left the group in the late 1990’s.