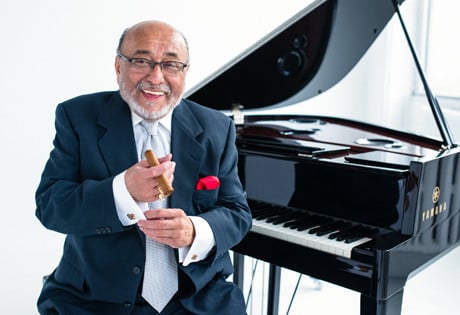 WeddingEntertainment.com makes it easy and trouble-free to check availability and pricing for booking Eddie Palmieri or any act in the business for your wedding. If we don't book an act for you, our service is free. For over 26 years we have booked and produced thousands of events for our clients worldwide. We can also handle everything necessary to produce the show for one all-inclusive price so there are no surprises. Simply fill out an entertainment request form and a booking agent will contact you to discuss the possibility of booking entertainment for your wedding.

Eddie Palmieri was born in 1936 in New York to Puerto Rican born parents who instilled a love of Latin music in their children. While in school, young Eddie was exposed to jazz music and began studying jazz piano when he was still in elementary school, growing enamored with such great musicians as Thelonious Monk. He started his own band when he was a teenager, and developed his own unique sound, blending jazz, swing, and Latin influences to include mambos, bongos, and congas in musical arrangements.

Palmieri has given audiences a number of notable works, including the Grammy award winning albums Solito and Palo Pa Rumba, both released in the 1980’s.  Other works include: The Truth: La Verdad (1987), Sueno (1992), Llego la India Via Eddie Palmieri (1992), Arete (1995), El Rumbero del Piano (1998), and Live (1999.) In the new millennium, Palmieri recorded Masterpiece/Obra Maestra with Tito Puente, earning another two Grammys, and he also collaborated with Brian Lynch on Simpatico, another Grammy Award winning album released in 2006.

Eddie Palmieri continues to perform and record. His most recent release is the album Salsa Brothers, recorded with his brother Charlie, which arrived in 2011.