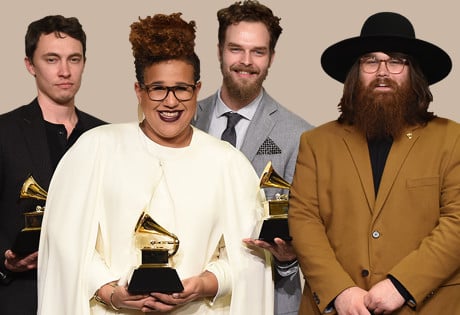 WeddingEntertainment.com makes it easy and trouble-free to check availability and pricing for booking Alabama Shakes or any act in the business for your wedding. If we don't book an act for you, our service is free. For over 26 years we have booked and produced thousands of events for our clients worldwide. We can also handle everything necessary to produce the show for one all-inclusive price so there are no surprises. Simply fill out an entertainment request form and a booking agent will contact you to discuss the possibility of booking entertainment for your wedding.

The American rock band known as Alabama Shakes was established in 2009, in the city of Athens, Alabama. The band’s earliest beginnings go back to when Brittany Howard and Zac Cockrell were both high school students who started a songwriting collaboration. Both musicians were drawn to “roots rock,” and so after adding Steve Johnson and Heath Fogg to the lineup, they formed Alabama Shakes and started performing around the local area.

Alabama Shakes released a debut self-titled EP in 2011, which immediately began to garner them significant attention. After performing at the CMJ Music Marathon showcase in New York, Alabama Shakes found itself on MTV’s 2012  list of Eleven Artists to Watch. An offer from ATO Records brought the band its first major record deal and a return to the studio to record a full-length debut album.

Boys & Girls arrived in 2012 and was an immediate smash hit. The single “Hold On” began to climb the charts, and Alabama Shakes spent the rest of the year performing on such television shows as: Conan, Late Show with David Letterman, Jimmy Kimmel Live!, and Saturday Night Live. The band also performed at Bestival (on the Isle of Wight), the Glastonbury Festival, and at the Bonnaroo Music Festival. Ultimately, Boys & Girls went on to earn Alabama Shakes multiple nominations at the Grammy Awards, in the categories of: Best Recording Package, Best Rock Performance, and Best New Artist.

Alabama Shakes is definitely a band on the rise and one to watch. The group recently finished studio work on their next album, Sound & Color, which is due out in 2015. The band is also scheduled to perform at the Coachella Valley Music and Arts Festival, the Rock Werchter festival (in Belgium), and the Byron Bay Bluesfest (in Australia), in the spring and summer of 2015.