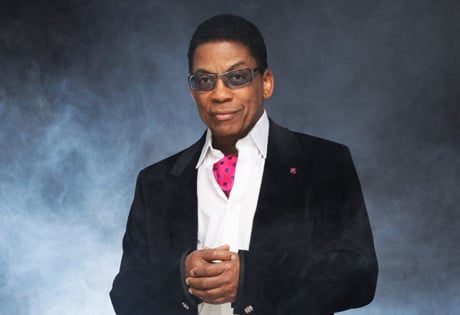 WeddingEntertainment.com makes it easy and trouble-free to check availability and pricing for booking Herbie Hancock or any act in the business for your wedding. If we don't book an act for you, our service is free. For over 26 years we have booked and produced thousands of events for our clients worldwide. We can also handle everything necessary to produce the show for one all-inclusive price so there are no surprises. Simply fill out an entertainment request form and a booking agent will contact you to discuss the possibility of booking entertainment for your wedding.

Herbie Hancock was born in 1940 in Chicago. Young Herbie began studying classical music when he was only seven, and he very quickly mastered the most complicated piano pieces, even performing Mozart’s Piano Concert No. 5 at the age of eleven. Around the same time, Hancock began to develop an appreciation for jazz music, and by the time he entered college, he was pursuing his studies in the genre full-time.

In the early 1960’s, Herbie Hancock became the pianist for Miles Davis’s Second Great Quintet. The experience helped Herbie to not only establish himself as a skilled musician, but also allow him to experiment with jazz more fully and to develop a unique sound. During this time, Hancock also recorded multiple sessions with such notable musicians as Freddie Hubbard, Donald Byrd, Wayne Shorter, and Bobby Hutcherson, mostly for the Blue Note label, and recorded his debut album, Takin’ Off, which was received to critical acclaim.

In the late 1960’s, Hancock switched to  Wanrer Bros. Records and composed the soundtrack for Fat Albert and the Cosby Kids, further bolstering his following. For the next three decades, Herbie Hancock’s star was on the rise, as he continued to record and release a series of hit albums and singles, including: “Watermelon Man,” “Chameleon,” “Doin’ It,” “Rockit,” and “Mega-Miz.” In the new millennium, Herbie Hancock continued to write, record, and perform, partnering with a number of other notable artists, including Carlos Santana, Annie Lennox, John Mayer, Kanye West, and Sting, to name a few. Hancock launched a European tour in 2005 and returned to the US at its end to perform at the Bonnaroo Music & Arts Festival. He also performed at Rhythm on the Vine in 2008, to benefit the Shriners Hospital for Children, and performed at the We Are One concert in 2009, as part of President Obama’s inaugural festivities.

Most recently, Hancock joined the UCLA music department as a professor of jazz music. He was also recently named a Goodwill Ambassador for UNESCO. Herbie Hancock’s most recent release is The Imagine Project, which arrived in 2010.